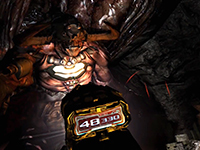 We are getting DOOM 3 out there one more time with the announcement for DOOM 3: VR Edition coming to the PSVR this month

It looks like we are going to have a whole lot of PSVR titles coming here soon and the first one we are talking about today is the announcement for DOOM 3: VR Edition. Just as it all sounds, we are going to be getting that classic id Software title back to us in a VR setting so we can feel more of the ripping and tearing out there in the depths of Hell. Sooner or later we are probably going to see the whole DOOM IP in this setting from Bethesda, but now we can look for this to hit the PS4 and PS5 on March 29th here. I think that is the bigger surprise with it flipping out there so fast from the announcement.

Not only are we getting this version of DOOM 3 out there, but we are seeing all of the DLC for the game that is out there get the same treatment. It does not look like all of the visuals have been upgraded to the same levels we have seen for the other versions of the DOOM VR titles, but maybe that is part of the charm of it all. It feels like it will be something that might be a little jarring for VR to me. It might also be something that could help us all to be able to experience all the gore in the most glorious of ways out there. Thankfully, we do not have a long time to wait to see how it all flows for us.

A demonic invasion has overwhelmed the Union Aerospace Corporation’s Martian research facility, leaving horror and death in its wake. You are one of the few survivors, a marine with access to an arsenal of weapons. Fight your way through the darkened, claustrophobic corridors of the research facility and into Hell itself to stop the invasion from reaching Earth.

DOOM 3: VR Edition also includes both expansions — Resurrection Of Evil and The Lost Mission. In The Lost Mission you are the sole survivor of Bravo Team, tasked with destroying a teleportation relay located deep inside Hell capable of sending an army of demons to Earth. Resurrection Of Evil takes place two years after the events of DOOM 3 — you must recover an ancient artifact able to open a portal to Hell and destroy it before the Maledict can use it to exterminate humanity.

Are you shocked to see that we are getting a VR version of DOOM 3 or is it only a matter of time to see all FPS titles go this way? Do you think we will see anything remastered or upgraded along the way or will it stick to the older version of the visuals? What motion controls will there be in the mix of it all or will it be stuck to the basic controller scheme we know from the base game? Let us all know down in the comments and then feel free to discuss it all as you wish. If there is more to share for DOOM 3: VR Edition, we will have it here for you. Be sure to keep coming back for all of that and much more.