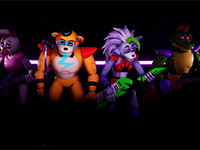 Get ready to test more of your courage and sanity, as we have a look at the upcoming Five Nights At Freddy’s: Security Breach fresh out of the State of Play showcase last week as well as the various other titles there. this one just further expanding the Five Nights At Freddy’s universe and story, but it also looks as if Steel Wool Studios is offering up a few new changes to the gameplay loop we have seen in the past titles. That is, it looks like Security Breach will be offering a bit more of an exploration and other smaller things to it all so we can not only get further invested in the characters and story, but have some truly frightening experiences along the way of it all.

Up to now, I have been casually looking at Five Nights At Freddy’s as the look and tone of the IP has always been interesting to me. Security Breach looks like it actually might suck me fully into it all as it looks like we are going to have the same colorful horrors following us but also more logs to have in the game that could flesh out more of it all. All while offering different locations and mechanics we might have to use in each. Some to stealth and run while others might require other forms of games to be played while staying hidden. Something that seemed to not be there in the other games to me while the lore always seemed interesting. I do have a feeling that Security Breach might not be the best place to jump into it all unless there is a full recap of things before or during the game, but this one looks like it could get me to finally jump on the hype train and ride it all the way into the depths of the facility here.

First Gameplay trailer for Security Breach recorded mix of cinematics and PS5 footage of the next chapter in the Five Nights At Freddy’s saga.

Have you been following along with Five Nights At Freddy’s well before the announcement of Security Breach or have you only been aware of it and never taken the plunge? Do you think that this will be an open-environment style of game or will it mostly be on rails to help with the scares to pay off? How do you think the team will welcome new players to the IP with this title or will we all be lost until we go through hours of video breakdowns from other fans of it all? Let us all know down in the comments and then feel free to discuss it all as you wish. If there is anything further to share for Five Nights At Freddy’s: Security Breach, you know it will be here. Keep checking back for all of that and so much more.