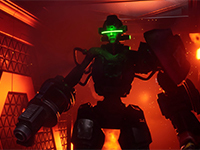 It is time to get teased just a bit more for the System Shock’s Remake that many of us are still waiting for here. Time has been flying by ever since we first heard that Nightdive Studios was bringing this to us and we have had a whole lot of teases in the time. Thankfully, this one comes with a nice little extra for System Shock in the way of a Demo hitting for the PC versions of the game. Yes, you can give this version of the game a bit of a play now and see how well this remake might be for the IP that many have loved for quite a long time. You have to love when you get fun updates like this out there.

On top of all of that, we have a few more things to learn about what this version of System Shock will have. The team is re-recoding the audio files for the game, altering the hacking system a bit more, and giving us all some greatly updated character models and textures to experience in the game. It will be interesting to see if there will be any kind of modifications to the story and events of the original version of System Shock. Maybe we can have a bit of a taste in the demo we have here now but I have a feeling it will stick closer to the source than deviate a bit for now. We just have to wait until it downloads to know for certain.

The new System Shock is a complete remake of the groundbreaking immersive sim, first released in 1994. Players, in the space-boots of an unnamed hacker who awakes after a six-month snooze, finds Citadel Station in quite the state. Murderous robots, killer cyborgs, and malicious mutants have run amok. And the station’s AI, SHODAN, seems to have developed quite the God complex.

Nightdive has given the entirely remade System Shock the full treatment, recreating the fan-favorite title for modern players with all-new HD visuals, updated controls, revamped hacking, and a renovated Citadel Station with all sorts of new areas and secrets to uncover.

Will you be giving the demo for the System Shock’s Remake a go or will you just hold off until the full release of the game? Do you think we will see the main story and events deviated here or will it just be a way to play the whole title again in a modern setting? What other aspects of the game do you think they have had to totally recreate from scratch and will we be thanking them for it? Let us all know down in the comments what you are thinking and then feel free to discuss it all as you wish. If there is more for System Shock, we will share it all here. Just keep coming back for all of that and more.