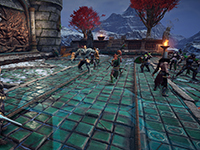 Turn-based RPGs do not seem to be all the rage anymore with many being overlooked or thrown into an action setting for some reason. This is why I am glad to hear about Disciples: Liberation getting the announcement here that is aiming to go down that path again and maybe bring it all back into a modern gaming world. That does require Frima Studios and Kalypso to make sure it all flows out there extremely well, but that does not mean we are not going to see another attempt at it. Something we should see when Disciples: Liberation launches this year on the PS4, PS5, Xbox One, Xbox Series X, and PC. As long as they do a great job and are not hit with any hardships along the way, that is.

In Disciples: Liberation, it looks like we will be facing off with some horrible evils out there to help write a new chapter in the history of Nevendaar. They are boasting that we could be seeing about 80-hours of gameplay in the single-player portion with four different classes to play with. All while driving our own destiny through our choices and actions and the command of 50+ units out there too. It does sound like it will be a title that is chalked full of all kinds of fun and some deeper darkness based on what we have to see here with the announcement for Disciples: Liberation. Have a look and then get ready to wait until we see some new gameplay flow out of the pre-alpha that they are looking to give players a chance to partake in.

Write a new chapter in the history of Nevendaar with Disciples: Liberation, coming this year! Step into a world of dark fantasy and build your own faction to liberate a war-torn world. Uncover stories long forgotten and lay your own path in this intricate, dark fantasy strategy RPG, coming in Q4 this year to PC, PlayStation 4|5, and Xbox (One, Series X|S).

Disciples: Liberation is a mature, dark fantasy strategy RPG with turn-based combat. Liberate the land of Nevendaar and uncover the endless stories hidden within this richly detailed world where every decision has a consequence, and every wrong move could be deadly.

Explore a rich overworld and align with a variety of in-world factions: from a human empire tinged by religious extremism to the dark forces of the undead lead by a mad queen. Assemble a team to gather precious resources, sway political standing, and take on brutal beasts in intricate turn-based battles.

Choice is everything in Disciples: Liberation and it is up to you how you write your story.

Do you think that Disciples: Liberation will scratch that itch some have had for a turn-based title or will it fall into the smaller subsection of the community more than anything? How dark do you think things will get in the game or will this be about it with the level we have in this cinematic trailer? Could we see a move away from the action-RPGs again or will that be the path that studios are going to stick with no matter the case? Let us all know down in the comments and then feel free to discuss it all as you wish. If there is more for Disciples: Liberation, we will share it on the site as soon as we can. Be sure to keep checking in for all of that and much more.