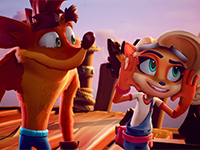 It seemed odd when Crash Bandicoot 4: It’s About Time dropped on us that it was only hitting the PS4 and Xbox One. At the time they were the big boys still out there but the PS5 and Xbox Series X was just about to launch and the Switch and PC options were always still out there. It looks like those were also in the pipes but Toys For Bob wanted to make sure they were ready before making the full announcement. An announcement that is finally here, as it looks like Crash Bandicoot 4 will now be hitting all of those other platforms on March 12th now. It only took a little more time, but it is all about that right now is it not?

For those that threw in for Crash Bandicoot 4 on the last-gen systems, the good news is that there will be a free upgrade to the PS5 or Xbox Series X version depending on which you had before. Unless you are reading this all from Japan where it looks like there will be a cost to upgrade. Thankfully, all of this comes with the option to move all of your progress over too while you take advantage of all of the new visual and hardware abilities the new systems have for us. Not to mention the fact that the PS5 owners will also have all of the new haptic feedback additions for Crash Bandicoot 4 that the controllers can offer up. If anything, it is all another reason to dive back into the game if you played it once and need to wrap up all of the other options to play with. I know I will be jumping back into the mix of it all soon.

He’s made you spin, jump and wump for 25 years, and this year, our beloved orange marsupial is celebrating in style. To kick off his silver anniversary, on March 12, the true sequel to the classic Crash Bandicoot trilogy from the ‘90s and the first original entry in the Crash franchise in more than 10 years, Crash Bandicoot 4: It’s About Time will launch on PlayStation 5, Xbox Series X|S and Nintendo Switch. The game will also launch on PC via Battle.net later this year. Fans are smitten with the biggest Crash game ever1, so whether it’s their first playthrough or their hundredth, there’s no better time to experience massive levels, badder bosses, and more gameplay. Fans should also be on the look-out for tons of fantastic festivities from Activision Blizzard aimed to engage Crash Bandicoot fans throughout the year.

Developer Toys For Bob has been hard at work to bring Crash Bandicoot 4: It’s About Time to new platforms. Fans on PlayStation 5 and Xbox Series X|S are in for some N. credible visuals when they see the game run in 4K with 60 FPS2. Additionally, players on either next-gen platform will enjoy quicker loading times to dive into the wumpa-eating action and 3D audio that will immerse them in all-new dimensions. What’s more, players who purchase, or already have, Crash Bandicoot 4: It’s About Time on PlayStation 4 or Xbox One will be entitled to receive next-gen upgrades at no cost (except in Japan) within the same console family3 (including the ability to transfer saved data).

PlayStation 5 owners in particular will be in for an extra treat with DualSense wireless controllers bringing adaptive triggers to players’ fingertips. Fans will now be able to feel the force of Neo Cortex’s DNA-changing blaster and experience the grip as they grapple with Tawna’s Hookshot. Additionally, PlayStation 5’s Activity Card feature will give players a clear breakdown of their progress throughout each of the game’s dimensions, providing guidance to achieve objectives and more.

Adding to the fun, fans will now be able to experience Crash Bandicoot 4: It’s About Time on the go when the time-shattering platforming adventure makes its way to Nintendo Switch for the first time, while Xbox Series X|S will utilize Smart Delivery to enable users to play the appropriate version depending on their console.

Crash Bandicoot 4: It’s About Time will be available for PlayStation 5 and Xbox Series X|S for $59.99 SRP. Pre-orders for Nintendo Switch ($39.99 SRP) are available in select territories starting today, via the Nintendo e-shop. The game will also be coming to PC via Battle.net, with pre-orders available now ($39.99 SRP). Fans can expect more information on the PC edition at a later date, along with other fun happenings in celebration of the franchise’s 25th anniversary.

Are you at all surprised to see that Crash Bandicoot 4 will be hitting all of the other platforms out there or is it a bit of shock that it took this long in the first place? Do you think it was all to make sure that everything worked fine on the current-gen systems before going to the next-gen systems? Are you curious about how these new features might be changing up the gameplay or do you think it will add only a little bit more of an immersive option to it all? Let us all know what you are thinking down in the comments and then feel free to discuss it all as you will. If there is more for Crash Bandicoot 4: It’s About Time, we will obviously have it here on the site for you. Be sure to keep coming back here for all of that and more.