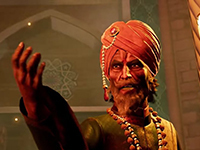 One more delay has hit the Prince Of Persia: The Sands Of Time Remake remake here and it looks like this one does not give us an end in sight. Yes, it is the dreaded indefinite delay that we have handed down here. Given that it is from Ubisoft, it is most likely not any word of cancelation as they have spent so much time and money on it already. They just most likely do not want to go through the same thing other titles have gone through but with the Prince Of Persia fans that have been calling for a remake to come for a while now. It is just best to leave it all open-ended so no matter what, fans should be happy with the end results for it all. If it gives us a better game, I'll gladly wait a little longer for it.

Interestingly enough, it looks like we are not getting the usual "polish" excuse that comes with all of these. It is more focused on making sure that they are able to stay as faithful to the original Prince Of Persia: The Sands Of Time more than anything. Given how last-gen the original trailer for this remake looked, I am going to wager that it is to try to bring it further into a modern video game era while still keeping everything we know and love from the original. It can be done as we have seen from other successful remakes out there. This is something I want to see as it could lead to fuller Prince Of Persia titles to come out and expand on it all just a bit more. I guess we will just have to wait for now.

Another update from Prince of Persia: Sands of Time Remake dev team: pic.twitter.com/O6OOmYXhOD

Were you expecting to see this delay for Prince Of Persia here or is this all a huge shock? Do you think it is to bring it all into a more modern game setting or was it that buggy that they needed to iron things out before offering it up to fans? When do you suspect we will see this finally hit all of the platforms out there? Let us all know down in the comments and then feel free to discuss it all as you wish. If there is more for the Prince Of Persia: The Sands Of Time Remake remake, we will have it here for you. We just hope it will be good news and updates and not more delays or cancelations.