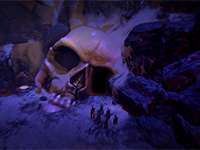 The beta test for Pathfinder: Wrath Of The Righteous is kicking off here with a new look at some of the new combat coming to this Pathfinder video game

This might be something you already know if you were a backer for the Pathfinder: Wrath Of The Righteous Kickstarter that went down a while ago, but it looks like the beta for the game is kicking off for those that partook in that campaign. For everyone else out there, we get to kick back and wait until Owlcat Games is ready to give us a taste of the game too or other videos start flowing out there for the game. This is something that is already happening out there if you were wondering. For now, though, we will dive into the new footage we have for this one as this one looks to deviate a bit from what we all knew from Pathfinder: Kingmaker already. In a good way in my opinion.

We have a new glimpse at how some of the combat will work in this version of the Pathfinder IP and it looks to be quite a bit like we had before. Quite a bit like the Baldur's Gate of the past for those that missed out on Kingmaker. This is not my preferred option for combat in the game after getting to work with the true turn-based system that came out over time and was supposed to be here in Wrath Of The Righteous. It fits the tabletop version of Pathfinder so very well and how I would want to play the video game version too. Although, I might be focusing on the part that they do not want us to, as it does look like we have some of those new transformations in here to turn us into some true behemoths on the battlefield. No real context to how it all works, but a whole lot of fun to look at as we wait.

Lead the Crusade against the demonic invasion and rise as a new hero wielding unimaginable powers in a brand new CRPG from creators of Pathfinder: Kingmaker.

Did you get in on the game during the Kickstarter and are ready to dive into this beta? Do you prefer to play the Pathfinder games in a true turn-based system or the more free-form version that came originally? How do you think these new forms will work in the grand scheme of the game here and could we see more of the dynamic scenes as we have in this video than we had in Kingmaker? Let us all know down in the comments and then feel free to discuss it all as you wish. If there is more to Pathfinder: Wrath Of The Righteous, we will share it all for you on the site here. Be sure to keep checking back in for all of that and a whole lot more.