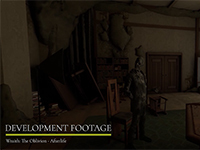 A new look at Wraith: The Oblivion — Afterlife offers up the Shadow of the Wraith we will be following along with in the game

Things are getting a bit spookier out there with some new gameplay for Wraith: The Oblivion — Afterlife to take in. This time to highlight one of the features from the tabletop game that some may know too well. This time we are taking a look at The Shadow and how Fast Travel Games will be bringing it into the fold. In Wraith: The Oblivion this would be the darker side of your psyche and the voice in our own heads. In this setting it becomes a manifestation of all of our darker feelings and thoughts and generally unseen. Given the VR setting of this, though, it is interesting to see how they will be managing it this time.

All of this is a work in progress for Wraith: The Oblivion — Afterlife so things might change over time. It does look like we will get to actually see and maybe interact with the Shadow as it tries to guide us down the path it wants us to go. It will be interesting to see if we can ignore and fight it in the game here or if it will be used as a progression device for our Wraith here. That is going to be my assumption with how dynamic of a creature it is supposed to be in the source, but I would love to be surprised by the fact that it is not the case in the game here. Have a look and see what could be coming to us this coming Spring.

Wraith: The Oblivion — Afterlife — Early Look At ‘The Shadow’

As a Wraith in Afterlife, you will have a companion of sorts by your side called 'the Shadow'. The Shadow is a manifestation of your dark subconscious — call it the devil on the shoulder, or the little voice in the back of your head telling you to do the things you really shouldn’t. So, while he functions as a guide through the game… should you really trust him?

This is a look at some exclusive development footage from Wraith: The Oblivion — Afterlife and more specifically, the role of the Shadow.

Wraith: The Oblivion — Afterlife is a VR horror game set in the World of Darkness, coming to all major VR headset in Spring 2021.

Do you have a feeling that this will be only a way to progress our Wraith through the narrative or could it be as dynamic as the tabletop version of things? Could we have to fight this creature over time or will it be what we use as a morality system of sorts in the game? Could we be able to manipulate the Shadows of other wraiths out there in the game or will this be the only one we see that has not turned into a Spectre? Give us your inner thoughts on all of this down in the comments and then feel free to discuss it all as you wish. If there is more for Wraith: The Oblivion — Afterlife, we will have it all here. Be sure to keep checking in for all of that and much more.