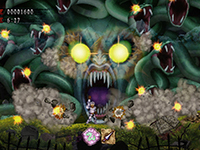 Ghosts ‘n Goblins Resurrection is still aiming to bring us all of the fun that we might have remembered from the original titles in the IP. It is also still aiming to bring us this fun on the Switch on February 25th. It also looks as if Capcom is finally ready to let us in on the other extras we will get to play with in the game too. All to add to the overall Ghosts ‘n Goblins experience that some of us have been looking forward to for a while now. All in the way of new weapons, magic, and modes that we might have assumed were coming but now have full confirmation too. All in some new gameplay wrapped up like a little gift for us all below.

It looks like we are going to be getting more difficulty settings than we have seen in Ghosts ‘n Goblins in the past. This is some good news for those that put the game down after not being able to make it through specific levels. It is also good for those that want to try to introduce their younger generation into the IP, as there will be a mode specifically designed for that and those that may not have the insane requirements of the previous titles. The more we can invite into reliving Ghosts ‘n Goblins the better, I say. It looks as if they got the memo there and are willing to give the options to be able to survive or go off-the-rails with the difficulty for those that want something harder.

There also looks like there will be a number of new and old weapons and magic mixed into Ghosts ‘n Goblins Resurrection to help with all of this, but the classics will still be intact for the game. The most interesting part looks like there will be a new "Shadow" or "Timed" mode we can play with too. Something that is listed as being more than just the same level we just beat with a few twists. It sounds like it could be the same level just with some vast changes we unlock after completing it once. We will have to wait and see on how that will be given the few details and gameplay we have here too.

Are you prepared to CHALLENGE AGAIN? You won’t have to wait long to take up your Lance and charge into the Demon Realm as Arthur on his latest rescue mission – Ghosts ‘n Goblins Resurrection launches digitally on Nintendo Switch on February 25th! Hit the jump for all the latest on the legendary knight’s next adventure, including a new trailer complete with a few spooky surprises that are sure to delight long-time GnG fans.

There are a few things we can all agree on, no matter where we come from. The sky is blue, water is wet, and Ghosts ‘n Goblins games can be incredibly difficult. The original arcade game was known for being a “quarter-eater” back when it first released, and when the game was later brought to home consoles in the 8-bit era, it retained many of the sharp edges that made the original so darn difficult.

Fortunately, Ghosts ‘n Goblins Resurrection offers multiple difficulties for those who want to experience all the game has to offer! If you’re a returning player who doesn’t mind seeing Arthur reduced to a pile of bones over and over again in your quest for glory, the Legend difficulty mode is right up your alley. Offering the most challenging Ghosts ‘n Goblins experience, this difficulty throws down the gauntlet with a large number of enemies and tough encounters that will put your skills (and single layer of armor) to the test!

Turning down the heat with the Knight difficulty mode will give Arthur an extra hit point of armor, allowing him to retain some of his armor pieces and his pride before he’s fully reduced to his boxers, while the Squire difficulty mode provides a bit more breathing room by reducing the number of enemies as well. For little knights, those just learning how to play, those looking for a more relaxed experience, and for players of any type, Page mode provides Arthur with a blessing of eternal life, allowing the gallant knight to resurrect right on the spot should he fall in battle.

For those of you who forge your way through the entire game on the Legend, Knight, or Squire difficulty modes, a brand-new challenge awaits…

A Ghosts ‘n Goblins game isn’t complete without a second loop, and Ghosts ‘n Goblins Resurrection is no exception to that rule. You may have seen it showcased in the trailer above, but every stage will have a “Shadow” version – a dark and sinister side to a zone you’ve conquered before. We don’t want to spoil the fun of discovering what these stages have to offer, but there’s far more to the shadows than a simple revisit. It will take all of your skills to survive each one, and promises to be the ultimate challenge for even the most seasoned knights!

Okay, okay, Arthur isn’t a warlock, that one was a bit of a stretch. However, you’ll have access to a wide variety of classic and new weapons that are sure to delight players of all styles. Arthur’s standard Lance returns, offering a good mix of range and power, while the Crossbow fires in a spread pattern, allowing you to target enemies that are just a bit above or below you. Spreading on contact with the ground, the Holy Water makes a return—wait, where are you going? Come back, the quick-flying Dagger is here, too! There are also some new weapons ready to mix things up – my personal favorite is getting up close and personal with the Hammer, a powerful short-range weapon that’s sure to re-bury any undead that pop out, while the new Spiked Ball rolls along the ground, crushing anything unfortunate enough to be caught in its path.

Magic also makes a return, of course! Rather than being tied to Arthur’s armor or the specific weapon he’s wielding, magic can be cast when it’s equipped to his aptly named Magic Waistband. You may remember Thunderstorm, which calls thunderbolts and lightning (very, very frightening), but it’s now joined by many other types of magic, including its earthy cousin, Emboulden. Unsurprisingly, this magic turns Arthur into a boulder. Rolling around at the speed of… a large rock… has its perks, causing Arthur to bowl over enemies – though you may have some trouble with platforming until you transform back. You can also turn enemies to stone, making them useful, if temporary, platforms, or even turn nearby foes into mostly harmless frogs with Transmogrifrog. It’s better when your adversaries croak but Arthur doesn’t, right?

Will you be taking on Ghosts ‘n Goblins Resurrection the hardest way possible or will you be easing yourself back into it all? Do you think we will truly use all of the new items and magic out there or will we stick to the classics as we normally do? What new twists do you think this Shadow Mode will have for us? Let us have all of those thoughts down in the comments. As more for Ghosts ‘n Goblins Resurrection comes out, I will share it on the site for you. Be sure to keep an eye out for all of that and much more.