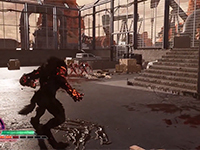 New footage for Werewolf: The Apocalypse — Earthblood shows off the three different forms our Werewolf will be able to play the world in

While the tabletop version of Werewolf: The Apocalypse may offer up more forms, Earthblood has been very direct that we are only getting three of these form in the final version of the game. More or less, they are the fully shifted forms between Lupus, Homid, and Crinos that are traditionally seen for the beasts. I think it was also a great choice for Cyanide to make sure they can highlight each in the gameplay for Werewolf: The Apocalypse — Earthblood while making it not needed to be in one form all the time while ignoring the others. For those that may not know for the benefits of these, though, we have some new gameplay to share for the game before it hit on February 4th and so we can know the differences better.

If you are unfamiliar with the terms used in Werewolf: The Apocalypse, these would be the full wolf form, human form, and Werewolf forms we have seen before. The wolf form mainly being used for infiltration and stealth in the game to help bring down the evil corporation out there. The human form to pretty much do all of the mundane things like interactions and collecting items in the world. With the final form being that of the combat form in the game. Even if it does look like the Human form will be able to do some kind of damage and not need to be a full werewolf to pull it all off. There are some other nuances in the tabletop that would not be able to translate easier in a video game form but the basics look like what we would need to have fun here.

This new gameplay trailer for Werewolf: The Apocalypse — Earthblood shows off all three forms you can take: wolf, man, and nigh-unstoppable werewolf. Look for it on February 4 for PC (via the Epic Games Store), PS4, PS5, Xbox One, and Xbox Series X|S.

Would you have liked to see all of the forms we know from the Werewolf: The Apocalypse tabletop or does it still make perfect sense the way it is here? Could we see some deeper uses in the game besides the basics here or will this be it? Could there be otherworldly collectibles that only the other forms will be able to pick up as we go? Let us all know down in the comments what you are thinking and then feel free to discuss it all as you wish. If there is more for Werewolf: The Apocalypse — Earthblood, it will be on the site for you. Be sure to keep checking back for all of that and much more.