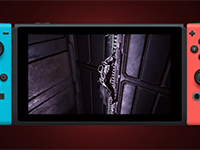 It is not like it was unknown that Hellpoint was going to be making the jump over to the Switch. We just did not have a solid release date for it, but that is all changing with the announcement that will now be February 25th or 26th. Not because there is some confusion or the developer not wanting to set a solid date. It is because there is a digital and physical edition for Hellpoint that will be dropping on the device respectively. With a physical edition also coming to the PS4 on the same date too. Just to make sure we have the option to buy our games the way we want to.

For those that may not have partaken in Hellpoint before now or were holding out for this launch, we do have some new gameplay to go along with this announcement to show off how this Souls-Like title will flow out there on the Switch. As is to be expected, it does look a little less fancy as the other consoles and most likely will be blown away when the full upgrade for the PS5 and Xbox Series X is out there, but it does look like the Sci-Fi Occult story will flow just as well. Even if it does look to be a little difficult to understand how the player is able to notice and react to some of the enemies we are seeing here. My guess is that is just the point of Hellpoint just like the many other titles in the same vein.

Publisher tinyBuild, in cooperation with Merge Games, is happy to confirm that Hellpoint, the dark Sci-Fi Action RPG from developer Cradle Games will be released digitally for Nintendo Switch on February 25 followed by a physical release on February 26th. Both versions will feature all post-release features and improvements and will retail for $34.99. In addition, a physical collector’s edition for Nintendo Switch is available for pre-order from Signature Edition Games.

Previously, Cradle Games announced that Hellpoint would be coming to Xbox Series X/S and PlayStation 5 later in 2021, bringing higher resolutions and additional graphical features from the PC version to the new consoles. A next-gen backwards compatibility patch was released in December 2020, adding an optional 60 FPS mode for PS5 and Xbox Series X. The PS4 retail version will also go on sale on February 26, courtesy of Merge Games, available in both standard and collector's editions.

Hellpoint is set in the aftermath of a massive quantum cataclysm called the Merge. You wake up on board the Irid Novo space station, a beacon of galactic cooperation and scientific exploration gone horribly wrong. What happens next will be solely determined by your choices.

Will you be picking Hellpoint up on the Switch or will it be the physical edition that we see here? Do you think that it looks a little shabby here or is it just the normal limitations of the smaller system? When do you think we will see that full next-gen upgrade hit us all out there? Let us all know down in the comments and then feel free to discuss it all as you wish. If we have more for Hellpoint, we will share it on the site. Please keep checking back for all of that and much more.