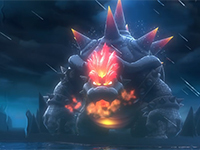 It looks like Bowser is going to be out in force in Super Mario 3D World this coming February 12th on the Switch. Not just as the villain that will be kidnapping the princesses out there as Nintendo has gone with over the years. It looks like Bowser will be out there in Bowser's Fury that adds even more to the overall Super Mario 3D World experience we are going to have. Adding a whole lot of new challenges and another character to help Mario make his way through the world and try to bring this beast of a Bad Guy down once again. We are going to have a giant monster fight at the end of it all.

In addition to all of the mechanics and gameplay we will have in Super Mario 3D World, it looks like Bowser's Fury will offer up Bowser Jr. to aid Mario in the world. This moves the multiplayer from a four-player to a two-player just for this specific island out there. One that will have the same platforming around the area but with the looming threat of a giant Bowser. A Bowser that will awaken and cause all kinds of havoc by dropping dangerous blocks and spewing fire out over the land. It will only happen for a short while, but given that we are still needing to find things to unlock the world so we can turn into a giant Cat Mario, we will need to always be aware of everything. It does add a whole new level of challenge too.

Team up with up to 3 other players to save the Sprixie Kingdom from the greedy clutches of Bowser. Then, adventure through the islands of Lake Lapcat, where unlikely allies Mario and Bowser Jr. unite to stop gargantuan Bowser from his furious rampage. Play two adventures in one game — Super Mario 3D World + Bowser's Fury launches on February 12, 2021, only on Nintendo Switch.

Does this make you even more excited for Super Mario 3D World to finally come out or will it be too much of a challenge to have? Do you think that we could have played the Bowser's Fury bit with the four-players or will it be that small to truly only need two? Will we see more expansions like this one over time or will this be an all-inclusive thing just this once? Let us all know in the comments. I will keep an eye out there for Super Mario 3D World + Browser's Fury, so keep a lookout for those updates. Please keep checking in so you do not miss out on anything.