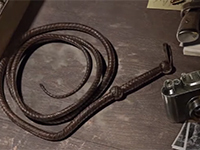 Here we go with an interesting update so shortly after hearing about Lucasfilm Games being a thing again, as we have the announcement for a new Indiana Jones video game now. A new game coming from Bethesda and Machine Games to give us that classic pulp comic feel again with the character. That is the assumption of things with what little we have for Indiana Jones here. All we have here is the official teaser that it is going to be a thing with little else to go on. I will make the assumption that we will see it on the PS5, Xbox Series X, and PC but we do not even have that here either.

Of course, this limited bit of information is nice but it does lead us to make our own speculations for this Indiana Jones title now. I will go on the limb and say that we are most likely going to see something closer to the original films with the Nazis and less of the aliens there. I say this as Machine Games is known for their alternate views of history and diving into those easy villains out there. I just hope that we are not going to be seeing something similar to the Uncharted games but with an Indiana Jones skin on it. I hope they do not make us wait too long to finally get that full reveal.

A new Indiana Jones game with an original story is in development from our studio, Machine Games, and will be executive produced by Todd Howard, in collaboration with Lucasfilm Games. It'll be some time before we have more to reveal, but we're very excited to share today’s news!

How excited are you to hear that we are going to be getting a new Indiana Jones title out there or do you think this IP is something that needs to swing on by? Do you agree that it will most likely be along the same lines of the classic films and stories or will they lean into the Sci-Fi side of things? Could this branch into their other titles in some way besides small Easter Eggs? Let us have all of those thoughts and speculation down in the comments. We will share everything we find for this Indiana Jones title as we get it. Be sure to keep checking back in for all of that and much more.