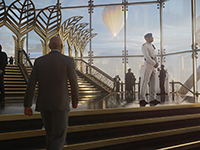 It looks like some of the sites out there have access to Hitman 3 or at least some new footage for the game, as we have a nice little treat with that today. A nice little treat that also has the added bonus of the full listing of locations we will get to murder in when the game hits the PS4, PS5, Xbox One, Xbox Series X, Switch, and PC on January 20th. We will focus on the gameplay more for Hitman 3 instead of the locations, as many have not been shown off so we are going to be left to speculate what is going on within them. I do mean shown off in video form and not just word and images for now. Even if it does look like we could have a fun one for Halloween events with the Carpathian Mountains…

Diving into the gameplay here, we get to see more of the Dubai mission we have seen all over for Hitman 3 thus far. The mission further looks like we will have two targets and all of the usual things we have experienced in the past too. Also, as in the past, it looks like enemies and other NPCs will be a bit forgiving on the weirdness of the character showing up and doing things in the area. It is interesting to see that we will most likely need to worry about NPCs finishing tasks before taking them out, unlike some Hitman missions in the past. It all does boil down to a similar gameplay loop just with some different and cooler locations to take in. Maybe it will keep expanding when this one is said and done too.

Hitman 3 currently has six confirmed locations, each likely to feature one main mission. These locations get used extensively throughout the life cycle of the game, though, as IO Interactive will place Elusive Targets in them, create contracts, and even release DLC that sees the maps somewhat re-imagined.

Were you expecting to see the game break from the recent Hitman style of gameplay or is this what you expected? Do you think that if we take down the enemies before they are done that it will trigger a higher alert or will it just keep the cycle of NPCs to come over until they are all taken out? Would you have rather seen a completely new way to go unseen in the mission than what we have seen for a while now? Let us all know down in the comments and then feel free to discuss it all as you wish. If we have more for Hitman 3 to share, it will be on the site for you. Please keep checking in for all of that and much more.