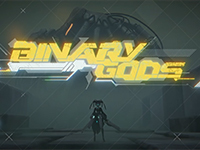 It looks like we are getting another title from Rayark, as we now have a concept video for Binary Gods to show off the next project they are bringing us. Something that looks like it will most likely be on an iOS or Android system, but some are assuming it could move to the Switch and maybe other systems too. Given that it looks like the following video we have for Binary Gods is using mobile controls, the assumptions are easy to make but it does look like there is more action going on than most would expect for a mobile title. It is always weird when we get video like this with little other context to go with.

As you will be able to see down in the video for Binary Gods, it looks like we will be controlling a stylized robot that is taking down various other robots out there. All in a fun looking future world where it looks like machines are just the norm. It is a very weird place to be with it all but it is starting to be yet another slow week and Binary Gods is the latest for us to look forward to. Maybe this is how the developer is coming out and making a title for the next-gen consoles instead.

We wish everyone a happy new year!

How do you feel about Binary Gods based on what we see here? Do you think it will only be a mobile title or will it make the jump to other platforms given how flashy it all looks? Would you want to play a high-action mobile game or will these be titles that are only played by a subsection of the gaming community out there? Let us all know down in the comments and then feel free to discuss. If things change for Binary Gods, we will share it all here. Please keep checking back for all of that and much more.