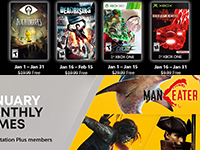 A new month is almost on us here with January and that means new video games that we are going to get for free. Well, video games that you will get for free if you are part of the PlayStation Plus or Xbox Gold services. If you are then you may be in for a treat as the list of titles going live starting next month is here and we have it for you. Again, we get to expand our titles on the Xbox One, Xbox Series X, PS4, and PS5 without needing to make any extra spends at our local stores.

It looks like we are going to be kicking off the new year with some solid video games out there on both consoles here. Some of them may be titles many of us have had a chance to play already, but if not, Maneater, Little Nightmares, Shadow Of The Tomb Raider, and Dead Rising are all solid titles to throw in the mix. That is if we want to ignore the other great video games we are going to see here in a few days. Just the way that this next year needs to start off for many of us out there. I am glad to see that and hope it all continues on that path moving forward.

Here is the list of games we will all get for our PlayStation systems starting on January 5th of 2021.

Here is the list of games we will all get for our Xbox systems starting on January 1st of 2021.