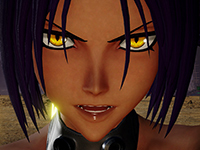 Add one more character from Bleach into the mix for Jump Force, as we have the showing that Yoruichi is joining the fight over there. Not any time soon with the announcement of "early 2021" for this DLC to hit, but it is one more character to keep an eye out for as the roster expands. It does look like we might have one more character in this run of DLC for Jump Force to come, though, for now we will focus on what we have to look at today. As short and sweet as it all might be here. Get ready to be teased…

Just as with many of the characters in Jump Force, I am a bit lost as to what to say in terms of their abilities and how they are being translated over to the game. I am certain that the devote anime fans will be able to see it all better, but it does look like there will be some solid swordplay and spiritual stuff mixed in with all of the high-flying action we have already seen. At this point, I am not sure if Jump Force is a fan service game or if it is a fighting game that aims to keep most characters functionally the same with a few callouts to the source material mixed in. Either way, we have the announcement and a little tease to watch as we wait until 2021 now.

There's nowhere you can run once the "Flash Master" crosses your path.

What are your thoughts on Yoruichi joining in on Jump Force here? Does the character look to be a solid adaptation from the anime or is it another skin for us to gawk at with the same moves we have mastered? Who do you think will be the last character added into the game here and will it be worth the long wait into next year for it? Give us all of that feedback down in the comments and then feel free to discuss it all as you wish. If there is more for Jump Force, we will certainly have it all here. Be sure to keep checking back in for all of that and more.