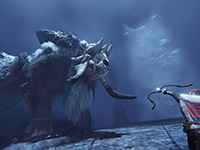 The fight of the colossi will continue with the latest gameplay we have for Praey For The Gods to take in. It has been a bit of time since we have seen anything for the game here and now No Matter Studios is letting a new boss fight out there into the wild. All to show us how some of these huge fights will go and to show us how Praey For The Gods could look on the PS5 when it comes in Q1 of 2021. That is the timeline for it to hit the PS4, Xbox One, and PC too so it is worth a watch for all besides those lucky enough to have the new console out there.

There is no doubt that Praey For The Gods is using quite of bit of inspiration from Shadow Of The Colossus here. In fact, if I did not know this was a different game in the first place, I would say that it looks like a sequel or remake of the other. Not that this is a bad thing, but there is no mistake where Praey For The Gods had its roots set down. From the climbing and traversal to get to the boss's weak points to the charging slams to destroy them along the way. It definitely looks like fans of the other game will have a solid one to pick up next year.

Check out a few minutes of gameplay from a back-and-forth boss battle in Praey For The Gods, the Shadow Of The Colossus-like action-adventure game that's coming to PS5 (and also PS4, Xbox One, and Steam) in Q1 2021.

Are you still excited to get your hands on Praey For The Gods next year or will you need to see more than just a boss fight? Do you see all of the inspirations here or does it feel more like a lifting instead? Do you think that we will see this also hit the Xbox Series X too or will it stay on the systems that we all see here? Let us all know down in the comments and then feel free to discuss it all. If there is more to share for Praey For The Gods, we will have it all here. Be sure to keep checking back on the site for all of that and much more.