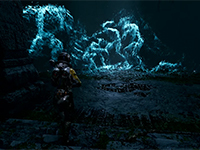 March 19th is still a little way a way for us to be looking at Returnal to hit the PS5. Not overly far, but still far enough out that we have time to pine of the game and try to figure out what will be coming out of Housemarque when it finally does come. That also means that we will be hanging on every word and bit of gameplay we can scrounge up for Returnal to get us all properly excited for the exclusive to finally land. Even if that means going through some of the behind-the-scenes stuff that we love hearing and watching over here. Get ready for a new developer diary, of sorts, but with some new gameplay mixed right into it all.

It would seem that the developer has been offering up a slight look at where the studio and team started out and where they were going before the big showing of Returnal during The Game Awards. Not uncommon for s studio like this. The latest one we have, now that the cats are out of the bags, dives further into the idea behind where Returnal started out and how the team is making another game that they just thought would be fun with little else to go on. Almost like all of the other smash hits that they have put out on the emerging consoles at the time. This one just happens to dive into a bit more of the psychological horror side of the coin here that the colorful shooters we have seen. It is an interesting talk that is had, but what it all boils down to here. Even if the gameplay highlights more of the shooting and exploration than anything I can see falling into the category mentioned here.

In this episode of HouseCast, Harry Krueger, Game Director of Returnal, talks about the origins of Returnal. We also discuss what kind of experience players can expect from Housemarque’s most ambitious title yet!

Are you sitting back certain that Returnal will be a hit just as their other titles have been or could this require much more from us to appreciate the risks they are taking? Do you think that most studios should have an approach like this one or will it only be the smaller studios that are given the freedom to do what they wish? Are you seeing any of those mentioned themes in the new footage or does it look like a space shooter and not much else at this point? Give us all of those thoughts down in the comments and then feel free to discuss it all as you wish. If there is more to share for Returnal, you know we will have it all here. Be sure to keep checking in for all of that and more.