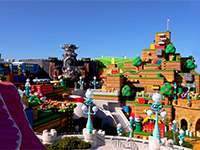 Only a little off-track, it looks like the Super Nintendo World is slated to open early next year for those able to make the trip to Japan or live there already. Originally this one was slated to open this past Summer but the world being what it is, it has been pushed out. Now those looking for that little extra fun, if it is safe to do so, can enjoy what Nintendo is going to have to offer at Universal Parks on February 4th of 2021. Possibly a little too soon for those that will have to travel to go see it, but it will be open once we can. That and we are going to be able to see what is in store from all of those that can make it and directly from the source right now. Let us all have a small tour of what wonders this will hold.

Before we continue one, the Super Nintendo World is also slated for an opening in Hollywood, CA, Orlando, FL, and Singapore in the next few years too. I am certain there will be some differences, but as the following tour will show us, the parks will be filled with some interesting interactive parts in the park. All to add to the fun of the Nintendo-themed rides we will have to experience; the AR Mario Kart being the highlight here. The park will also have some exclusive gifts to purchase and foods to enjoy while going about. Not to mention the fact that it looks like we will get to experience everything from pipe-warps to becoming a smaller version of ourselves by taking damage. It looks like it will be a whole lot of fun and one more reason to keep the fight against the Rona going strong.

Get a peek at Super Nintendo World in this trailer for the Nintendo Theme Park area which opens at Universal Studios Japan on February 4, 2021.

Super Nintendo World will feature Mario Kart and Yoshi-themed rides and attractions, as well as restaurants, shops, and more.

Are you excited to be able to get out there and experience what Nintendo has to offer up or will it be a wait until it opens outside of Japan? How long do you think the lines will be to hit all of the activities in the park or will it flow smoothly to get us all in on the fun? Do you think that collecting all of the coins will offer anything more than bragging rights or will it be just that? Let us all know your thoughts on this down in the comments and then feel free to discuss it all. If we have news about the other Super Nintendo World locations, we will share it all here. Be sure to keep checking in for all of that and much more.