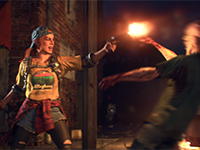 Today is the day that the alpha test for Back 4 Blood kicks off and if you were lucky enough to get access, you might already be jumping in on it. If you missed the announcement that there was going to be one from Turtle Rock Studios, do not fret as there is still time to try to get in on it. It runs from today (17th) until the 22nd for many out there to give it a go, help with balancing, and try to break it so it will be the best in the end. For those whom are going to wait for Back 4 Blood to officially launch, then sit back as we also have an update that will inform the testing players what is going on in the game and what we might expect in the future. As if we would want to miss out on this test, though…

In Back 4 Blood, we will be facing off against creatures referred to as "The Ridden." All because this is a parasite that is corrupting the human form and causing all of these creatures out there and not a virus or something supernatural. We will get to play as one of four "Cleaners" sent out to go take them all on and help save humanity from the Hells it is now filled with. Even if they all do look like they will function in Back 4 Blood as we would expect from many other zombie shooters out there. You know the kind that also gives each of the heroes a special extra weapon and perks specific only to them to help survive it all.

Back 4 Blood also looks like it is going to try to mix things up more than other games in the same vein, though. They are calling it the "Game Director" but it looks like some of the missions and areas will be some kind of procedurally generated to adapt to our playstyle and preferences. All through some form of AI in the game but also through the way of game cards that will be played by the Director to add extra challenges to the missions. To help balance, though, we will be able to collect our own cards to play before missions in Back 4 Blood that will give us a few extra perks along the way. It does seem like that might keep each outing a little fresher each time, but I fear once we memorize the levels it will not matter that much if enemies and objects are spawned in new places each time.

It's simple: Eradicate the Ridden and reclaim our world. Get briefed on what to expect this Thursday from the Back 4 Blood closed Alpha!

Will you be joining in on the alpha test for Back 4 Blood here or will you be waiting until a later date to get in on the game? Do you like the card system that it looks like they are starting with or will it get unbalanced too quickly in a short time? Do you think this will truly make each mission feel different or will it just add a few more places to stalk, clean, and then find items? Give us all of those thoughts down in the comments and then feel free to discuss it all. If there is more for Back 4 Blood, we will share it all here. Be sure to keep checking in here for all of that and more.