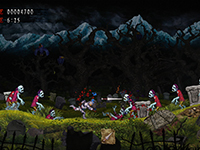 We had so many fun announcements and shows for video games during The Game Awards this year and another we had was Ghosts ‘n Goblins Resurrection. A new version of this IP from Capcom coming back after 35 years and heading to the Switch. Not in some crazy far-off future, but on February 25th for the system. Okay, it might be a bit of a ways off from right now, but nowhere as near as how long it has been since we saw Ghosts ‘n Goblins in the first place. Just be happy we have it all and a nice new look at how things have been changed up to fit the new system and era of video games out there. I know I am excited for it all.

The sound of Ghosts ‘n Goblins Resurrection might make you think that this is a remaster or a remake of the original game, but it looks to be more like a new title in general that will be paying homage to the past titles. We do get to see Arthur back in action with his classic weapons, but also a few more in the mix with a hammer and a mace. Arthur will also have some new skills and magic to employ against the new and old enemies mixed in for Ghosts ‘n Goblins Resurrection. Some of which you can see below as he platforms and slays the monsters in the game. All with a new art style that is fitting but also paves the way for the new title. I know I am overly excited to add it to my library. have a look and get ready for a shorter wait than before.

Ghosts ‘n Goblins Resurrection will once again follow the valiant knight Arthur as he runs, jumps, and battles his way through eerie stages set in the Demon Realm, a demonic fantasy world. Arthur must overcome countless ghoulish foes on his quest to rescue the princess from the treacherous grasp of the Demon Lord. Brave knights will need to proceed with extreme caution as terrifying dangers await, including familiar enemies like Zombie, Skeleton Murderer, Pigman, and Red Arremer.

Did you have Ghosts ‘n Goblins on your list of games that needed a comeback? Do you like the new art and features this game will have? Would you have rather just seen a full remake of the original titles instead of what we are getting here? Let us all know down in the comments about what you are thinking. I will keep an eye out for more to share on Ghosts ‘n Goblins Resurrection, so please keep checking back for all of that. I am certain there will be more before the February release date of this game.