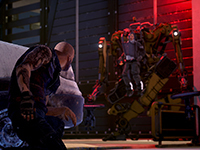 We have gameplay for Werewolf: The Apocalypse — Earthblood to give us a solid look at how this werewolf adventure will flow

Here we go with some solid gameplay for the upcoming Werewolf: The Apocalypse — Earthblood to take in. A full six minutes that goes over the various aspects we have been pondering about and fresh out the mouths of Cyanide to give us clarity. It is exciting stuff indeed with February 4th not too far off now and many wanting to have a solid World Of Darkness title to play on most of the major platforms out there. That is not to discredit the other games in the Werewolf: The Apocalypse line, but an action game is what many have been waiting for since it was first teased at E3 oh so long ago. I know I am in that boat for certain.

As we have been told, Werewolf: The Apocalypse — Earthblood will have a mix of stealth and high-action all based on the different forms that Cahal can shift into. The wolf is the sneaky form to navigate the environment, the human to do the basic interactions and dialog, with the Crinos (Werewolf) being the form when shit hits the fan. We all know it will with the way Rage is used in the tabletop version of Werewolf: The Apocalypse and that it will be used to fuel many of the special attacks and skills in the video game here. Even if it does look a little choppy in the following video but I am hoping it was captured that way to better show off everything instead of how the final version will function.

Fans of the IP, in general, will also be glad to finally see some of the Famori in action and coming about just as we should assume in a Werewolf setting. These are the monstrous humanoids you see here for those not fully up on their Werewolf: The Apocalypse lore. Something that it looks like the developers will also offer up a bit more than thought with the mentions of tribes and everything in some of the basic dialog we hear in this footage. Have a look and listen for yourself to see if it is going to be the version of the franchise you have been waiting for.

With Werewolf: The Apocalypse — Earthblood releasing on February 4, 2021, NACON and Cyanide are pleased to unveil a 6-minute gameplay video featuring the game’s exploration, stealth and brutal action. For the release of this video, Julien "Patch" Desourteaux, Game Director at Cyanide, provides insight into the game’s development, and its roots in the World Of Darkness – a shared story universe where supernatural beings roam hidden from human’s sight.

The biggest challenge for Cyanide was implementing all the mechanics for an action RPG: designing the combat systems, balancing the effects, working on different types of animations, and more… When the main character, Cahal, shifts to his Crinos form, players must feel like a bestial predator. Thus, a "stance" system was implemented so players can switch between agility and ferocity according to the situation.

The team went to considerable effort to create a visceral beat’em up game while staying faithful to the original tabletop roleplaying game. In Werewolf: The Apocalypse, the Garou are warriors of Gaia, the Mother Earth, and are fighting to save the planet from the Wyrm's corruption. This aspect of the game is visible when the players explore environments like an overexploited forest, an arid desert, or an offshore oil rig.

Does this gameplay look a little choppy to you or was it just the way it was captured so we can better understand some of the mechanics? Do you think you will have to be better versed in the lore of Werewolf: The Apocalypse before playing or will it spell it out well as we flow through the game? Would you have liked to see how some of the dialog goes down and how Rage could build into all of that? Let us have all of that feedback and more down in the comments and then feel free to discuss it all as you wish. If there is more for Werewolf: The Apocalypse — Earthblood, you know we will have it all here. Just be sure to keep checking in for all of that and much more.