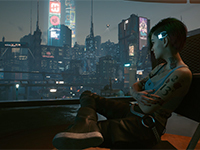 As if the whole gaming community was not already over-hyped up for the release of Cyberpunk 2077 on December 10th, we have one more video to take in to do just that again. It is the launch week for the game and that means that CD Projekt RED has placed out a trailer just for the occasion to help sell the game a bit more. Again, I am not sure if anyone out there has missed the fact that Cyberpunk 2077 launches this week. It has been a good eight years in the making and even non-gamers know exactly what is going on with this title so far.

For those looking at it as they might be spoiled more as to what is going on in Cyberpunk 2077 in terms of story, this is mostly a sizzle real of things with a little bit of gameplay mixed in. Unless you slow things down and go frame by frame, you should be in the clear to get further hyped up on the game without the worry of having the story ruined for you. Unlike some of the past videos we have seen out there for Cyberpunk 2077. It does look like it shows off a bit more on how Silverhand will be a protagonist in the game as well as V, but everything else is just enough hype to let those that have been waiting have the ability to hold on for a few more days.

Would you rather live in peace as Mr. Nobody… or go down for all times in a blaze of glory?

Cyberpunk 2077, an open-world, action-adventure story from CD Projekt RED, is coming to Xbox One, PlayStation 4, PC, and Google Stadia on December 10th, 2020. The game will also be playable on Xbox Series X and PlayStation 5 consoles when available.

Did you somehow forget that Cyberpunk 2077 was launching this week and needed this reminder? Have you been able to dodge all of the game's spoilers that are out there thus far or has it all be ruined for you? Are you curious as to why we need more hype for a game that the community has already been over-hyping since 2012? Let us all know down in the comments what you are thinking and then feel free to discuss it all as you wish. If there is more to offer up for Cyberpunk 2077, we will do it here. Just keep your sensors locked on the site so you are able to see and hear it all.