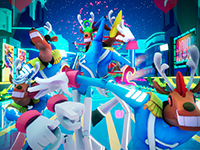 It is that time of year again with all of the holiday updates coming to video games and it looks like No Straight Roads is heading down the path now. This all comes with a free update that we are seeing on the PS4, Xbox One, and PC here soon that will add in the Christmas Edition of the game. All with a bunch of new adventures to have in No Straight Roads but with all of the Christian Mythology themed music that everyone pines over during the month. Just in time for all of those that are looking for something to add into the mix.

There is no direct word on how much is coming to No Straight Roads with this update, but we have a nice little look at it all below. That and one song that will be included in the mix as well. It is a free update, so there is not much to complain about. Just take the addition to No Straight Roads and then enjoy it is all we have to say about it here. Have a look, then a listen, and then get ready to look for this update to download in early December for most platforms. The Switch will be getting the update at a later date and hopefully it will be before the end of the year.

Sold Out and Metronomik are delighted to announce that No Straight Roads is welcoming in the holiday season with a free ‘Christmas Edition’ title update, introducing a sackful of holiday-themed fun to the rockin’ action-adventure.

Available in early December at no additional cost to all new and existing No Straight Roads players on the PlayStation 4 computer entertainment system, the Xbox One family of devices, including Xbox One X, and PC via the Epic Games Store, the ‘Christmas Edition’ update remixes the game with brand new Christmas music, decorations, outfits and more to celebrate the holidays.

Once the title update becomes available, players will be able to access the new Christmas Edition content by accessing the boss fight menu in Vinyl City and selecting the new ‘Xmas Remix’ genre.

Was No Straight Roads the game you thought was going to get this kind of update or is it a nice little surprise to get? How many new songs or remixed songs will there be in this update or will we have to wait to find out? When do you suspect that we will see this update on the Switch and could it be some time into the next year for that? Let us all know down in the comments and then feel free to discuss it all as you wish. If there is more for No Straight Roads, we will share it here. Just be sure to keep checking in for all of that and much more.