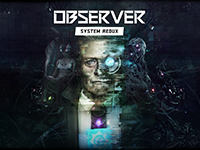 Talk about a title that needed to be brought forward into the next generation of systems and hardware and now we have it with Observer: System Redux. This would be that interesting horror title from Bloober Team that also happens to be set in a cyberpunk universe and uses the voice and likeness of the late Rutger Hauer. If you have been paying attention here, then you should know all of this extremely well. What you might not know is if it will be a reason to pick up Observer for the first time or yet again now that we have some solid updates. It is time now to dive into all of that, as we offer up our review for the digital logs going forward in time.

The year is 2082 and we are in the futuristic world of Krakow. The world has been taken over by all of the cyberware and software we would expect and thus been ravaged by a digital plague. This is where we meet Detective Lazarski after he gets a weird phone call from his estranged son. All of which places this seasoned detective on a dark and twisted investigation where he needs to jack into the minds of the living, and sometimes dead, to try to unravel what is going on out there. Something that definitely takes us all into some rather dark places in technology as well as the human psyche. Get ready to have your mind melted just a bit to solve all of this. I am not sure why developers tend to add things like the need to move our sticks or mouses to manipulate objects in our video game worlds, but it is here in Observer: System Redux and just about as much of a pain as always. I am not talking about when you hold up items to inspect or the like to find clues, but when you have to hold down one button, move the item with one control stick, and then move the character with another. This makes things like opening doors or drawers in Observer a nightmare and it only feels like it was a bother in this version more than anything to help immerse us more. That has to be the general point so you do not just click on things and they open for us. But in a future where everything is digitized and mechanical, it would make more sense to offer us the button press instead of controller ninjitsu to move about. Do not think that this ruined any of my overall fun with the game, but it was so very problematic when trying to get around rather quickly to be able to accidentally shut the door in our own faces.

The other weird thing I found about this version of Observer over the original is that everything felt insanely darker in terms of lighting than before. I get that it can help with some of the horrors of the game and that some areas just will be underlit, but I had many chunks of the game where I should have been able to see without the night vision mode yet had to turn up the game's brightness almost to the maximum to see anything. Even following the recommendations from Bloober Team on where to set it all was not helpful as the instant you move into a dimly lit area; you might be walking into a wall for no reason other than you think you are just continuing down the right path. It also made it harder to see all of the wonderful visuals that we now have with Observer: System Redux, which just seems like an odd choice to go with even if the horror is something you are trying to sell. While it may have sounded like I had issues with the lighting and visuals of Observer: System Redux, that could not be further from the truth outside of the game's brightness levels. Once I moved out of the range that was recommended, that was a truly shining part of the game and a sold reason to hop back into it all among others. This never felt like just an upscaling to work on the new hardware and thus fake the new visuals, but something that the developers actually took time to offer up once again. The particle effects, the colors, and the way the lighting was used made it truly feel like a next-gen title or the next version of Observer we should be looking for here. I caught many little things I missed my first time through just because there was more detail to take in and I was surprised I even made it through the first time after noticing it all. All in the best of ways to take that, mind you.

Visuals aside, Observer: System Redux also did an amazing job and carrying the story and events through to us while also offering up some insane mental trips along the way. It almost feels like this is what Bloober is going for in all of their games in general and it delivers well here. Even with an open-ish way to go about the whole game's events, it always seemed to wind its way back like the curving hallways and puzzles we are forced to figure out while diving into the minds of others. At the heart of it all, Observer is a story game, and it all pans out better, for me, in this latest version of it all. Worth noting here, I actually found myself reading more of the text and emails here just to better understand it all and this is something I generally skip in video games to get back into the action. A minor thing for some of you out there, I am sure, but it was a huge delight for me on this go once again.

One last thing that I found a new appreciation for in Observer during this replay as to be the use of the levels and area when we step into the dreamscapes. It is something that always seemed a bit more on the basic or as a cheap trick in games like Layers Of Fear, but in this one, it all seems to help tell their own story while trying to unnerve the audience at the same time. We are digging around in the minds of the dead and witnessing horrible acts they saw, so it makes sense. But in these versions of it all, the point comes extremely across while making things tricky to figure out in terms of gameplay. You can get that dread of working in a cubical farm in general while trying to bring down the overlords without needing to be told that directly, in one instance, and it is never played for cheap effect. This is about the same for all of the scenes like it in Observer and all add to the fun of the story and then the gameplay. Even if it feels like a weird walking simulation at times, it just shows that the craft is getting perfected over time as the developer should. If you have already played and enjoyed the original Observer, then there is no doubt that you should want to head back in with all of the updates and new content that is here with this release. It looks and plays a lot more than just a remastered version of the first version of it all and you will not be let down by giving it more time. If you have not had the experience before, Observer: System Redux is definitely the version of the game that you will want to start with but take note that at its core it is a horror walking simulation more or less. It has some amazing visuals, an intriguing story, and uses the area and levels to perfection. There is no doubt about that, but if that style of game is nowhere in your interests, then you might do better watching someone else play it just to experience the rest it has to offer.

I give Observer: System Redux 27 Brain Pills on the Brain Pill scale.

Observer: System Redux was developed and published by Bloober Team for the PC and Xbox Series X on November 10th, 2020 and November 12th for the PS5. A PS5 copy of the game was provided by the publisher for reviewing purposes.