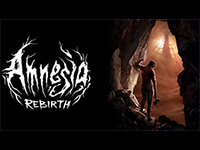 If you were looking for some more frights to have in general, then you might have had an eye on Amnesia: Rebirth and if you should add it to the smaller list of those titles around this time of year. Sure, this one from Frictional Games may have come out just a bit ago, but that does not mean that we cannot carry the horror on just a bit longer on the PS4 and PC. The PS5 is in that list if you want to play Amnesia: Rebirth through the backward compatibility functions too. “Should you” is the big question here? Well, get ready for the unload as we head into our review on the game and if you should be wandering around the deserts burning just a bit more here.

It is 1937 and not is alright in the world. Most of us know what is going on there, but in the case of Anastasie Trianon, things are going to get a bit worse. First, her plane crashes, her husband is dead, and now she has to deal with crippling nyctophobia and possible Voodoo pregnancy. Yeah, things are not going so well for her and she needs to find her way back and piece things back together in her head and maybe save us all from something much worse. It really is as bizarre as it may sound and only gets weirder. In Amnesia: Rebirth, and given the mental issues of the protagonist, obviously light and darkness are going to play heavy into it all. More than just a visual thing or to obfuscate the next big scare around the corner. I was fully aware of this before diving in and giving the game a go. Sadly, as it is a major aspect, it feels like it was a secondary add-on to the game more than anything. The matches burn faster than I have ever seen matches do in the past and the lantern offers up even less light than it should. These are issues as you can quickly burn through it all just trying to see where to go next and then be left losing your sanity, and thus the game, relatively quickly. They only added annoyance and never tension as it was not like we knew where to go in the game but wandered aimlessly and hoped for the best. Seeing as you slowly lose your sanity in the dark in Amnesia: Rebirth, it could lead to some quick issues and almost render the game unplayable just because one could not make out a hallway turn and thus lost all the light they had.

Also, in a similar vein, the tension that did come about never seemed to have a true payoff in Amnesia: Rebirth. Multiple times in the game I was in a section where the screen told me to crouch-walk to lessen noise and visibility. Even when walking aimlessly, I rarely had anything to truly worry about. In fact, the first few times I do not remember seeing a single bit of danger while wandering about the dark caverns. Not even a sound of a flash of shadow to let me know something else was there. It seemed like a little bit of a letdown as I felt safe walking about as I wished and never to rush to where I needed to go. There were a few exceptions, sure, but they were so few and far between that it never had the implied impact on me. It felt as I have said, like a walking simulator in the dark and nothing more.

To that end, it also seems like Amnesia: Rebirth fails to direct the player to any actual events going on in the game that are scripted. I get that there is a no hand-holding aspect to the game, which could have been good, but I missed things that were planned to push things forward just because my camera was looking the wrong way when it started. I was treated to many a dark, black, or obscured screen only to find out near the end of it all that there was some visual to go along with the audio I was hearing. This left me confused quite often on what was going on or what I might need to do next. I managed to get through Amnesia: Rebirth, but it should not have been so all over the place as it was. In my eyes at least. If there is one thing in games like this that always seem to bother me, it is when puzzles are convoluted just to make the game feel like a game. Keys for no reason or missing things in other parts of the world that have no reason to be there outside of making the game harder. Amnesia: Rebirth on the other hand, kind of flipped this on its head a bit than expected. Missing the ingredients to make a mortar shell? They can be found where you would expect them but you will have to work for it. Need a wheel to push a heavy object around? Simply look around and you will find them and not tucked where most video games would. It added a weird sense of realism to the oddness of Amnesia: Rebirth and it was a welcomed departure. I cannot tell you how many times that I ran to empty rooms because I swore something had to be in there because other games would have done this, only to find out if I looked in obvious places I could have made things a bit easier.

Another part of Amnesia: Rebirth that I did enjoy was how the story overall was presented to the audience. In a game with such a title, it would make sense that we would be learning just the same way as the protagonist in the game. Almost like a fog is lifted off certain parts, which happens to in-game images, or fun little revelations or questions to further things along. This is something that needed to be done well given the overall story for Amnesia: Rebirth. Even when things seem to get a little on the "out there" scope, it all brings it back in and tried to help us and the character understand the weirdness of it all. Even if the story is not the best out there, it is told in such an interesting way that it lends to the gameplay and overall experience of the game. I know I might be in a minority for this, but I loved how it all worked here and can see others enjoying it too. At the end of the day, "should you spend money and time on Amnesia: Rebirth?" That is a hard one to say. If you are a fan of the Amnesia franchise, then you will most likely dig what we have here to experience. For those that will be dipping their toes in for the first time, I would have to say hold off. While the story is interesting and told in a great way, the main mechanics of the game hold it all back a bit. Also, once you learn that each new missing item does not always need to be a treasure hunt through monster-filled lands, it will be a walking simulation where matches are used instead of torches. An odd thing to experience, but I can see it souring a lot of people out there. Maybe if there is a patch or two that can help with some of the main gameplay issues I had I would recommend it, but in the state it is now, I do not think I can.

Amnesia: Rebirth was developed and published by Frictional Games for the PS4 and PC on October 20th, 2020. A PS4 copy of the game was provided by the publisher for reviewing purposes.