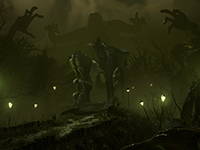 So far in The Medium we have seen the dual-world gameplay play out in a rundown hotel or the alternate world version of that location. Until now, it was thought that was going to be the only main location that Bloober Team was going to have for us in this game. Now, we have a new trailer for The Medium that not only shows us a place outside of all of that but some new threats in the world that we will have to navigate and survive out there. Something that looks to be an issue in the real world and something that looks to be a bigger threat on the other side of the shroud. All of which looks to elevate the horror themes in the game based on the video we have to share.

It is hard to say if this is gameplay or a prerendered trailer for The Medium, so we will focus on the threats we will see here. It looks like The Maw that we have seen in the past could be fully shown here, or this could be one of the minions. Of course, the other big thing to look at is the new unnamed character that happens to share the likeness of Marcin Dorociński of The Queen's Gambit fame. He will have his own story in The Medium and could be something for us to further worry about as we go on our own investigation in general. We will have to wait to learn more about the character or hold off until launch, but you can see how they are being brought to life here too. Have a look for yourself.

The Medium — The Threats

Bloober Team, the studio behind acclaimed horror titles including Blair Witch, Observer: System Redux, and Layers Of Fear, have debuted a brand new trailer for dual reality game The Medium, that introduces a new character and takes players beyond the corridors of the Niwa Hotel.

The character’s face whose name will be revealed in time, is based on Marcin Dorociński, a Polish actor who fans will recognize from the popular Netflix series The Queen's Gambit. This mysterious figure is capable of ruthlessness and brutality and has his own revenge-driven agenda. As players uncover more about his story, they will see how it connects with Marianne’s investigation.

Fans will also learn more about the spirit world, a dark mirrored reflection of the real world that symbolizes the rawest emotions such as fear and anger. And they’ll discover The Maw is not the only hostile spirit lurking there.

Do you think that The Medium is looking more of horror now or will it just have elements in there in addition to the investigation aspect? How do you think this new character will play in the game or will it be a straightforward villain we have to deal with? What do you think of the other supernatural creature we get to see here and will it all look this amazing when it hits the PC and Xbox Series X? Let us all know down in the comments and then feel free to discuss it all. If there is more to share for The Medium, we will have it all here. Just be sure to keep checking in for all of that and more.