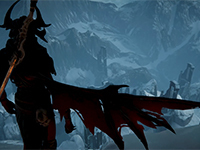 Get those heads banging, as we have more for Metal: Hellsinger and this time it is all about the new music we are going to be shooting to in the game. For those that may have forgotten, this is a rhythm shooter that will have us blasting our way through Hell to the beat of some heavy and dark metal. The name Metal: Hellsinger kind of alludes to all of that, but it is nice to have a bit of a recap here to get us back in the mindset. Something looks to be going insanely well based on the latest song and music video we have for the game here. There also happens to be a whole lot of new gameplay to show off the game mixed in too. Just as one should assume for this title going forward until we see it hit all of those platforms out there in 2021.

I am still not 100% sold on how the gameplay works in Metal: Hellsinger, but the game does look like it could be a blast if it flows just as well outside of the developer's hands here. More so based on the slow release of the soundtrack to it all and how heavy it will be in the long run. Granted, one has to enjoy the music genre that we are getting in Metal: Hellsinger to truly appreciate it all, but maybe it will bring some over to the darker side as it gains popularity. At least it will let us learn about some lesser-known artists and music out there while trying to perfect the shooting to the beat mechanics in the game. Only time will tell if it will work as well as others have tried before.

Renowned FPS developer David Goldfarb of The Outsiders has promised that their upcoming rhythm shooter Metal: Hellsinger will be “more metal than metal”. Today publisher Funcom and the developers have released a gameplay-centered music video proving his point. Featuring headbanging vocals from James Dorton (Black Crown Initiate), Poetry of Cinder gives you a feel of the atmosphere that awaits you in the darkest corners of Hell.

Metal: Hellsinger is a rhythm FPS, where your ability to shoot on beat will increase your power and intensify the music. The developers have taken great care to make the music as central a part of the game as the action and have therefore created a whole new way of designing in-game music. Every level has its own song, and every song is divided into multiple layers, ranging from atmospheric background tunes to powerful metal anthems. Your performance determines how many layers of the song will be played, with the vocals kicking in as you peak.

The unique layering system has been designed all the while making sure the game stands firmly on its own two feet as a shooter and ensuring you don’t have to be a metal fan to enjoy this game.

How do you feel about Metal: Hellsinger as it all stands right now and will it bring more fans to the music genre? Do you think we will see any big artists lend their music to the game or will it be more on the underground side of it all for now? How do you feel about the rhythm shooter genre so far with the few titles out there already and does it work well to mix them? Let us all know down in the comments and then feel free to discuss it all as you wish. If we find out more for Metal: Hellsinger, we will add it to the site for you. Please keep checking back for all of that and much more.