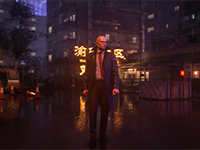 We have a new location announcement for Hitman 3 so we know a little more of the places we will get to murder in when then game launches on January 20th. Some of us out there love getting these little looks, and for those looking for something else, it looks like IO Interactive is hooking it up with a developer diary at the same time. All of which is the same video we have to look at today for Hitman 3, which showcases a little of the new location, Chongqing, and how the game's world is being designed. Everyone that has stuck around the franchise this long should know it fairly well, but now we have a look at how it will be on the next-gen systems if you can score one.

As you will be able to see, it looks like the lighting and weather effects in the world of Hitman are going to be raised quite a bit than before. They were impressive the last few times the games have come out, but here we get to see a bit more on how rain and water will change things up, as well as the lighting and shadows. Given that we are in the big stealth mode again for Hitman 3, all of this will be something we need to pay attention to as we cloak ourselves or need to worry about hiding the kills we have just made. I am curious to know if blood trails will be a thing here and sometimes we will not be able to cover our tracks. That would lead to some fun gameplay changes.

Chongqing is a new location for Hitman 3, taking Agent 47 to the rainy, neon-lit streets of a Chinese transportation hub packed full of shops and food stands, all crammed into tight streets—with plenty of secrets off the beaten path. Chongqing is also the destination to showcase improvements and refinements coming to Hitman 3‘s technology.

Powered by IO Interactive’s proprietary Glacier engine, Hitman 3 will look, sound and play better than ever with improvements to lighting, reflections, animation and AI. Chongqing also features full water effects, with details such as raindrops hitting Agent 47 and his clothes getting wet, all adding to the immersion of experiencing Hitman 3.

On next-gen consoles, Hitman 3 will run in 4K resolution at 60 frames per second with HDR support. The latest “Under The Hood” trailer showcases this brand new location with smooth new gameplay moments that show off the refinements to interaction animation and AI, as well as Glacier’s crowd technology that will allow up to 300 NPCs in a location at once.

Hitman 3 can import locations from the previous games in the trilogy and have more than 20 locations under one roof. All of the improvements to rendering, animation, and AI introduced with Hitman 3 can be enjoyed across all three games, making Hitman 3 the ultimate place to play the entire World of Assassination trilogy.

Are you as impressed with the way Hitman has evolved here or will you need to see it running in-person before you can make that call? Do you think this is a PC and next-gen only look at the game or will it all hold up on the Switch and VR too? Would you like to have to worry about blood trails and the like in the game here or would that be too complex of a game to enjoy? Let us all know down in the comments and then feel free to discuss it all. If there is more for Hitman 3, we will certainly add it to the site for you. Just be sure to keep coming back here for all of that and much more as we wrap up the year.