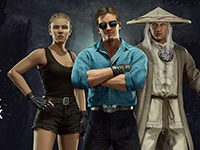 There has been a bit of a letdown with the delay of the upcoming Mortal Kombat reboot that is in the works. It may not have been something that everyone out there has been looking for, but to help soothe some of that pain from the delay, NetherRealm Studios is bringing something new for the game. New in the way that we will see more characters from the 1995 movie back in Mortal Kombat 11. We have had one already, and now we are going to see three more join in the fun too. The exact characters we would think to given the popularity and the image we have to share with it all too.

As we had with Shang Tsung already in Mortal Kombat 11, we are getting skins for Johnny Cage, Raiden, and Sonya Blade. All of which share the likenesses of Christopher Lambert, Linden Ashby, and Bridgette Wilson-Sampras but it does not sound like they were able to get the voices here. Not a huge issue as it is all for a fun $5.99 USD to add on, but it would have been fun to have the actors they could get back in or use audio clips to fill it all in. Now I am curious to see if we will get more of these characters added in as we wait for the film to maybe release.

How are you feeling about these Mortal Kombat skins coming back or would you have rather seen other characters get the skin treatment? Do you think we will see this come for the new film too or maybe even a tease while we wait just a bit longer? Would you have rather seen more of the missing characters get added in instead of just skins? Let us all know down in the comments and then feel free to discuss it all below. If we have more to share for Mortal Kombat 11, we will certainly share it all here. Just be sure to keep checking back for all of that and much more.