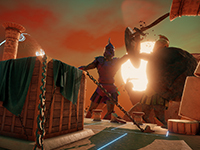 A new Myst inspired title, Ryte: The Eye Of Atlantis, is coming to Steam VR with Ryte taking us all down a virtual rabbit hole based in myth

Long ago were the times that we had the fun of point-and-click with Myst and on December 8th we are going to get something close to it again when Ryte: The Eye Of Atlantis launches in the VR space. Yes, this does shake up the core gameplay element that we mentioned before with the other title but it looks like Orichalcum Pictures has more in mind than bringing back a classic franchise in a different form. To be clear, Ryte is not based in that other universe but just uses the game mechanic ideas to tell a different story and dive into some different times that we could be wanting through Steam VR. I know I am sold on the basic idea based on just what we have here.

In Ryte: The Eye Of Atlantis, we will be taking on the role of an agent from the future that has had their consciousness sent back in time to see the world of Atlantis before it fell. All of which based on some works of Plato that help describe the fabled lost city and the reasons behind it vanishing the way it does. In Ryte we will be moving about the virtual space to solve puzzles and engage in the story that is crafted here to give us all a better understanding of what may have happened and how things could have been linked to other cultures. Ryte will be focusing on the Greeks more than anything, but we will get to see a few other cultures, as Egyptian, worked in to further explain some of the unexplainable. If that makes sense as a sentence.

Orichalcum Pictures, a hybrid production company and non-profit founded to explore archaeology through a multimedia lens, and developer VR Connection have announced that ancient Greece and Myst-inspired VR adventure game, Ryte: The Eye Of Atlantis, will launch for Steam VR and Oculus on December 8, 2020. Set in a true-to-life vision of the fabled lost civilization, players will be able to admire historically accurate artifacts as they solve challenging puzzles and make decisions that could impact human civilization forever.

After traveling back in time, alternate history enthusiasts will be able to channel mythical energies and wield fantastical powers that allow them to manipulate the environment. As players learn to read the stars, decipher riddles, and join forces with Atlantean natives like Danae, they will find their place in a battle for the fate of the ancient civilization. Every decision impacts the game’s narrative in some way and determines one of four distinct endings.

Does the idea of Ryte intrigue you or would this have fit better not as a VR title? Do you think it will help explore what could have happened in one of the biggest conspiracies out there? Do you think this setting is tailor-made for a virtual setting and getting transported to a different world and time is what we should be aiming for in these games? Let us all know down in the comments and then feel free to discuss it all as you wish. If there is more for Ryte: The Eye Of Atlantis, we will share it all with you here. Please keep checking back for all of that and much more out there.