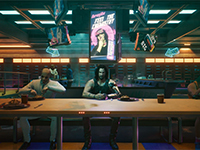 The next, and final, Night City Wire is here for Cyberpunk 2077 and it offers up a whole lot to look at yet again. This time more in the aspect of Johnny Silverhand (Keanu Reeves) and how CD Projekt RED will be bringing the actor to life in this digital space. Not only the character but the whole world of Cyberpunk 2077 with the music and new technology to make sure that the voice and animations flow perfectly for the ten different languages that the game will be localized in when December 10th hits us. It will be a big day and a lot is riding on the game, so you best bet that it all looks just as impressive as we have come to assume here. At least when it comes to the videos we have here.

This one definitely goes more into the nuts and bolts of making Cyberpunk 2077 and not as much when it comes to the gameplay. There is a nice and long story trailer with gameplay at the end, but this one focuses more on how the characters are being brought to life and the various other world-building aspects. Things like having a robust soundtrack that we have heard a few tracks of and then an original score. Something that streamers will have the option of turning on and off to make sure their videos do not get taken down while streaming Cyberpunk 2077. Not that I can imagine many wanting to watch others play the game right now instead of laying themselves after such a long wait. It is what it is and now we know a bit of all of that to experience.

The show started with the reveal of an action-packed trailer focusing on Johnny Silverhand and the unique connection he shares with the game’s protagonist, V. This was followed up by a behind-the-scenes video with Keanu Reeves talking about his transformation into Night City’s iconic rebel rockerboy, with a look at voice and motion capture recording sessions.

Gamers looking to get into the mood for Cyberpunk 2077 can now also check out the freshly released Original Score EP, featuring 6 tracks for a total of 22 minutes listening time. The EP is available now on a selection of popular digital music streaming and distribution platforms.

Next, with JALI the episode turned its focus to the innovative technological solution used in Cyberpunk 2077 to power facial expressions and lip-sync for characters in the game. The video provides insight into how JALI makes performances immersively realistic across 11 fully localized languages.

Just before the show ended, the Official Gameplay Trailer for Cyberpunk 2077 made its debut. Over 5 minutes long, the feature highlights an assortment of aspects of the open world, action-adventure story players will be engaging in upon launch, complimented with never-before-scene footage showcasing the experiences awaiting in the dark future.

It is nice to know that we are going to get some "live" radio stations in Cyberpunk 2077 that we will be able to cycle through as we go through the game. All to have more of the music come through while we hunt down all of those stylish bits of wardrobe to put on our version of V. Also, to have linked to the other titles from CD Projekt RED if we so choose too. I am not sure how well it will go the other way, but I would totally wear a White Wolf jacket in Cyberpunk 2077 or in real life, if I could. An interesting feature but I am not sure how widely it will be used moving forward.

Are you excited to see how Johnny will be a co-protagonist in Cyberpunk 2077 or does it feel like the team is leaning a little hard on the celebrity aspect here? What songs do you think we will hear in the game that will be flagged for copyright or is that just a precaution when it comes to the original songs that streamers will need approval for to have in the streams? Will you be playing those digital playlists now and until launch or do you want to be as surprised when they come on in the game? Let us have all of those thoughts down in the comments and then feel free to discuss it all. If there is more for Cyberpunk 2077, you know we will have it all here. Just be sure to check in for all of that and more.