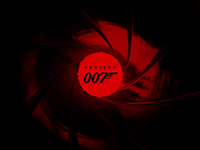 The rumors were flying as to what IO Interactive was going to be working on after the current run at the Hitman franchise ends and it looks like we have the answer in the form of Project 007. Something that sounds exactly what you think it is here, as we will be getting a new video game in the James Bond universe from the developer in the future. When? Well, that is the question as Project 007 is still a working title and there is not much else to go on for it. We just get to know it is coming and that we can all start speculating as to what it all will entail. It is time to get those thinking caps up and running again.

We do have a nice little teaser for Project 007 before you move on from here and start those theories. Also, the announcement that it will be coming to consoles and PC when it does launch. It also looks like it will be its own story and not based on anything in the works currently; even though it does sound like they might be trying to get the game to launch around the same time as the new film comes out. Other franchises did the same thing without anything being tied in, but given that all we have is the working title of Project 007, I have a feeling that is a longshot to think about here.

It’s Bond, James Bond, coming to a console and computer screen near you. IO Interactive, in collaboration with MGM, EON Productions, and Delphi announced today that they are developing and publishing the very first James Bond origin story with the working title Project 007. Project 007 will feature a wholly original Bond story exclusively as a video game.

Over the last two decades, IO Interactive has created, developed, and published multiple award-winning titles in the stealth and espionage video game genre, including the acclaimed Hitman franchise. Project 007 will be powered by IO Interactive’s proprietary Glacier technology. The game will be made for modern systems and platforms.

Project 007 is currently in active development at IO Interactive’s offices in Copenhagen, Denmark and Malmö, Sweden. Both locations are recruiting elite talent from around the world to join the team that will build out this exciting and unique gaming title.

Were you expecting to see Project 007 be the studio's next big title or did you think they were going to go down a different path? Which version of the character do you think we are going to see and will it still link into the films beyond just names and characters? Could we be seeing a whole new version of Goldeneye out there again or will it play like a Hitman game with a different skin? Let us all know down in the comments and then feel free to discuss it all as you wish. If we have more for Project 007, we will share it all here. Just be sure to keep checking back for all of that and much more.