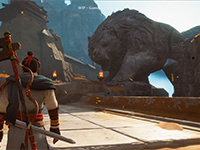 It seems like we are not going to get away with it here, as we now have word that Immortals Fenyx Rising has some planned post-launch content coming after the game lands on December 3rd. It is kind of the Ubisoft model here and no matter if you love it or hate it, it is going to happen here for this title and we have new details for all of that now. More or less, the names and quick overviews for what will be coming to Immortals Fenyx Rising and it looks like it will not be what most would assume here. Like, for instance, we will be seeing a few stories added in that do not revolve around the titular character and will be going to different areas of the world for their mythologies to be added in.

For Immortals Fenyx Rising, we have the announcement of three new expansions that will come sometime in 2021. A New God, Myths Of The Eastern Realm, and The Lost Gods. The first one adding in a new bit of story for Fenyx where Fenyx will be tasked with becoming one of the "Inner Circle" of the Greek God pantheon. Sounds like a bit of an end-game bit of content to me. The next one will give us a new hero in the Immortals story and whisk us all away to the realm of the Chinese gods and follow a bit along there. The third bit will take us back to Greece and place us in the role of Ash as shift the game into a top-down brawler of sorts and on a different island from the core game. It sounds like there is going to be a lot added in for paid DLC and then the obvious free stuff that will house the normal missions and other events we know from the developer's other IPs out there.

Immortals Fenyx Rising is coming on December 3, and Fenyx’s adventure will continue beyond the Golden Isle. Free in-game events, weekly dungeon challenges, and daily quests are coming, and those who want more can grab the season pass, which includes a bonus quest — When the Roads Get Rocky — and three story-driven DLC episodes: A New God, Myths of the Eastern Realm, and The Lost Gods.

Were you expecting to find out that Immortals Fenyx Rising was going to have a load of post-launch content or did it look like a self-contained title to enjoy? Do you think this could be testing the waters for the IP to branch into other mythologies or could it mean something else on the horizon? Do you wish we could just get all of this in one shot with DLC and Expansion announced well outside of the launch of the core game? Let us all know what you are thinking down in the comments and then feel free to discuss it all as you wish. If there is more for Immortals Fenyx Rising, we will share it all here. Be sure to keep checking in on the site to see and hear it all.