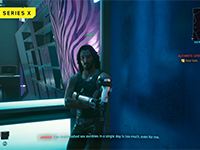 This should have been the big week for Cyberpunk 2077, but sadly it was pushed to December 10th. This is something all gamers most likely know given the wait for this one. Thankfully, if you can look at it that way, it looks as if CD Projekt RED is going to keep the ball rolling with a whole lot to share for the game this week even though the wait continues. We had the music video, then the official Night City Wire later in the week, and now we have a special broadcast that gives us a look at how Cyberpunk 2077 is going to flow on the Xbox One and Xbox Series X when it launches. More like how it will play on one and then via backward play on the other, but it is something new to see and keep us engaged.

I mention all of that, as there does not seem to be much of a difference between the two that I can see here. This could be due to the video compression of YouTube, but it is most likely due to the fact that we will not be seeing the full update to the next-gen systems until 2021 and we will only be getting something upscaled for Cyberpunk 2077 to hold us over. That is not anything directly from the team, but a speculation based on what we have to see here and how some of the cross-gen titles have been going so far. This could all have built into the reason for the most recent delay for Cyberpunk 2077, and we could see a vastly different experience when the game gets that full upgrade next year. We will have to wait and see.

Before you do dive into this new footage, if you have not already, do take note that it does dive deeper into some of the more adult themes that Cyberpunk 2077 will be tackling here. Adult in terms of sexual themes as most of the gameplay shows us walking around a Red-Light District will all of the brothels and shops one would imagine being out there. Take your warning before diving into the new gameplay and just know that it will all also be in the final build of Cyberpunk 2077. You cannot say we did not give you the proper heads up now.

Check out Cyberpunk 2077 in action on Xbox One X and Xbox Series X!

Cyberpunk 2077, an open-world, action-adventure story from CD Projekt RED, is coming to Xbox One, PlayStation 4, PC, and Google Stadia on December 10th, 2020. The game will also be playable on Xbox Series X and PlayStation 5 consoles when available.

Do you agree that this footage feels a bit on the lower end for Cyberpunk 2077 or could that just be how YouTube has processed the video here? Do you think it will be more than just upscaled visuals until the proper next-gen upgrade is out there or could we get a huge difference in systems here? Did you expect the game to dive into the themes we have here or will we see a new wave of outrage from gamers that claim they had no idea? Let us all know down in the comments and then feel free to discuss it all as you wish. If we have more for Cyberpunk 2077, we will certainly add it to the site for everyone. Be sure to keep coming back for that and much more.