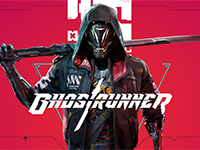 We sit down and review Ghostrunner. A new platforming and parkour title in the realm of the Cyberpunk style. Here is our review of Ghostrunner

There are many titles coming out here in the cyberpunk style or genre, and here we go with another one called Ghostrunner to experience. It is not an RPG, RTS, or Hacking style game but a new one that takes us into a cyberpunk world from One More Level and a parkour-platforming title that has a lot of the "live-die-repeat" mixed in. All while getting to run around as a cyber ninja in a fantastical world where we bring a sword to a gunfight. Sit down and get ready, as here we go with our review for Ghostrunner in its current state and place in the world.

Sometime in the future, the world is hit by some horrible event called the Burst. We, as a Ghostrunner awakens with no memory of things and a voice in our ear helping direct us along the way. All so we can run and slash our way through Dharma Tower to help regain that memory as well as set humanity free from the control of the various bosses out there. It is a good thing that we remember how to do all of these crazy acrobatics and skills to make it easier to maybe not get shot along the way. I am going to have to start this all off with the fact that the choice to make Ghostrunner a first-person game has to be one of the bigger missteps in general. Most of which will build into many of the other issues I had with the game. Given the fact that we are playing in a one-shot kill on both ends and that we can be attacked from any direction, having spatial awareness is something needed. Ghostrunner does not offer any of that at all and led to so much of my frustration with the game. Sure, it can be a fun goal to have here to try to plan things out but when things get random it is hard to use the special dodge mechanics when you have no clue a bullet is coming up from behind or side. Something that can lead to us having a good flow and then die for no reason to assume there was an off-screen attacker that we may have missed.

That would not be much of an issue if it also did not seem like every shooter in Ghostrunner seems to have perfect aim and homing bullets. If that was the case or need in the game, then having the spatial awareness to use the time-slowing skills to dodge. That would have worked, but it is not the case here in Ghostrunner and you can end up dying before you even take a step forward from another hidden killer. Some can say it adds some level of difficulty to the game but when there is little recourse to help beyond luck, it will lead to many just setting the controller down and moving right along from the game. Especially when you can see there is so much potential with the game once you can try to get past all of that.

Moving along from this choice to remove something we all need in Ghostrunner, comes down to the control scheme in the game and how it also feels a little less intuitive. This could just be on the console version more than anything, but it never felt like things were designed to flow as smoothly as the game makes it looks like it should. Especially when you are running, jumping, and trying to score a hit on an enemy before they shoot you. It was always easier to completely miss it all and take a swing well beyond where the enemy is standing. Not great as that usually means the magic bullet will hit you in the back of the head and then needing to restart that section of the run yet again in Ghostrunner.

I am going to have to fully praise One More Level here for the world design and style that they have in here for Ghostrunner for sure. To the same extent, the level design that comes along with all of that as it does feel like it fully fits and flows with what everyone expects in a cyberpunk world. That and there is some great use of the environment to add to the movement and possibly find some reprieve when navigating through all of those enemies with magic bullets. I know I found it as well needed so I could take a breath and then take in the world of Ghostrunner to keep the enjoyment going. Easily one of the reasons I did not end up breaking a controller or throw it through the screen I was playing on. A weird praise, I know, but it needed to be in here for those wanting a title that truly does have the look for it all.

Slightly building off of this, I will also have to say that I rather enjoyed the bosses I encountered in Ghostrunner in look and design too. For me, they looked at the parts needed and also offered up the proper level of challenge we could expect. Sure, it would have made a little more sense if the game was not forced into a first-person view the whole time, but it was worth it fighting through to these little scenes. All of which was something I wished there was more of in Ghostrunner in the long run of it all. They looked like they fit into it all and had a purpose beyond just being the next big target for us to take down. That was my take on it at the very least here and others might disagree with it all. When it comes to the look and style for Ghostrunner, I have to say that the team did a great job with it all. If you are not a fan of the style of gameplay or being forced into a first-person view with this style, then you are going to be severely frustrated with the game at the end of the day. There is little to do to combat this in the current version of the game and you will find yourself dying for no visible reason way too often. Pulling the camera out would have done wonders for this game and help us feel like the cyber ninja we are supposed to be. That said, Ghostrunner is going to be a huge game for a very small niche group of gamers that enjoy this style. For a broader audience, I feel like it will miss the mark and leave some with buyer's remorse. You know yourself better so you can make the final call, but this game was not for me at all.

I give Ghostrunner 4 Wall Runs on the Wall Run scale.

Ghostrunner was developed by One More Level and published by All In! Games for the PS4, Xbox One, and PC on October 27th, 2020 with the Switch version coming November 10th and the PS5/Xbox Series X in 2021. A PS4 copy of the game was provided by the publisher for reviewing purposes.