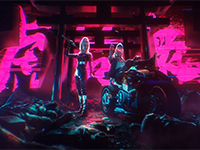 Just because we need more promotions for the biggest title release of the year, we have another for Cyberpunk 2077 to remind us that we are not getting the game this week. There is a new Night City Broadcast coming from CD Projekt RED too, but for now we get to see more of the world-building here for the game. In this case, it is a new music video of an in-game band that is a real-world one performing just for Cyberpunk 2077. Kind of as we have seen in the past with other bands pretending to be something different to fit the look and feel of the world. This time with Run The Jewels offering up the performance.

It looks like the band will be called Yankee & The Brave when in the world of Cyberpunk 2077 and we have the song No Save Point here. Not a song that I personally enjoy here but know it is coming in the game. I am curious if the video will be played somewhere in the game or if it will just be a track played in the world through various other means out there. It would make sense given all of the production that has gone into this for Cyberpunk 2077 but this could just be something to help promote the game. Not that we really need to do that much more as we wait for December 10th to hopefully bring us the final form of it all.

Check out the official music video for “No Save Point” by Run The Jewels, as heard in Cyberpunk 2077!

What do you think about this video for Cyberpunk 2077 and does it fit the world we have been anticipating here? Do you think it will be played in the game in some form or will we only get the audio in the soundtrack as we speed around the world? How many other artists do you think will be giving the game the same treatment and will we see some heavier music out there soon? Let us all know down in the comments and then feel free to discuss it all as you wish. Obviously, as we get more for Cyberpunk 2077, we will share it all here. Just be sure to keep coming back for all of that and much more in the future.