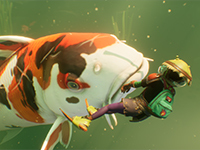 The updates keep flowing out there into the world of Grounded and this time we have a new one that will add in a Koi Pond for us to navigate and explore. I mean, the title here kind of gives all of that away but it needed to be said here before we go into the little extras that Obsidian Entertainment gave with that announcement. It is sure to be something that gamers on the Xbox One and PC will be glad to see if there are giving Grounded a go right now and want something extra to explore. Especially since we are going to be getting gear that lets us go underwater for a bit. Although, we will look like food to those pesky Koi so we will have to swim safely to not be eaten out there.

Among the new area we will have to explore and survive in Grounded, it looks like we have a few more creatures coming into the mix too. Obviously, there are the Koi but it also looks like we are going to get some nightmare fuel in the game with Diving Bell Spiders too. Those would be spiders than can hunt us underwater so we will not be safe from those arachnids even if we dive deep in Grounded. We just need to learn their life patterns and aim to steer clear. That or get ready to die some horrible deaths in the game instead. It is up to you if you want to do that, but you can get a taste of them in the following screenshots or as part of the Early Access update that should be out there as you read this.

As announced via Xbox Wire today, the team at Obsidian Entertainment has released the biggest Grounded update yet, introducing players to a brand-new biome — the underwater world of the Koi Pond.

Intrepid explorers navigating the depths of the murky pond will meet a host of new creatures, such as the Diving Bell Spiders (did you know certain spiders can swim?!), and the awe-inspiring Koi Fish. Additionally, players can craft new items to aid their survival in the pond, such as the Slime Lantern, Bone Trident, Gill Tube Rebreather, and much more. How excited are you to finally see this update in Grounded and will it be as vast as we are hoping for? Do you think we will see more creatures like the Diving Bell Spiders in the future updates or will there only be so many freaky creatures in the game? Do you think we will ever be able to set up underwater camps so we do not need to surface as often in the game? Let us have those thoughts and everything down in the comments and then feel free to discuss it all as you wish. If there is more for Grounded, we will add it to the site for you. Be sure to keep checking in for all of that and much more.