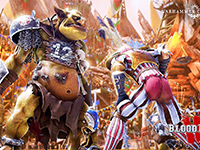 Earlier in the year, we had the announcement for Blood Bowl 3 to head out there to keep the insanity flowing. Specifically, when that will be is still up in the air as Cyanide Studios is still working on the game to bring it to the PS4, PS5, Xbox One, Xbox Series X, Switch, and PC platforms. Thankfully, it looks like we might be able to get a taste for Blood Bowl 3 before it officially launches as they are planning a closed beta for fans of the IP to take part in and maybe help shape near the end. All of which through various ways that does not seem to force you to just pre-order the video game as of yet. Good news for those that want to try before they buy; although it does come with a few disclaimers before you get overly excited.

It looks like the current caveat to get in on the closed beta for Blood Bowl 3 is that you need to pre-order the new edition of the board game for the franchise. An interesting way to go about it for now, but I can see it working to some degree. There is word that there will be other ways, I am guessing by pre-ordering the video game too, but those are still yet to be revealed as of this original writing. I would also guess, depending on the state of the world, it will be a code given out during some gaming event where Blood Bowl 3 is featured so we can get as many gamers in on the game before launch. It is what they should be aiming for but I know that they also want to make their money too. You have the information now, so you can do with it as you please.

NACON and Cyanide are pleased to announce that a closed beta for Blood Bowl 3 will launch in early 2021. This announcement accompanies the Games Workshop one informing players that they will receive access to the Blood Bowl 3 beta if they pre-order the new edition of the board game.

Access to the Blood Bowl 3 closed beta will be possible in several ways. As well as pre-ordering the board game, other ways to access the beta will be revealed later along with more details on the dates and game content.

Funnier, bloodier, and more spectacular than ever, Blood Bowl 3 will be a hit with fans of the universe and strategy games alike. At launch, the game will include 12 teams with their own pitch and cheerleaders, Campaign and Multiplayer modes, and more customization options than a Blood Bowl game has ever received before.

Planned for release in 2021, the game will be available on PlayStation 4, PlayStation 5, Xbox One, Xbox Series X/S, Steam, and Nintendo Switch.

Does this make you want to pre-order the Blood Bowl board game here or will you be holding off for the digital version of it all? Do you think the beta will be more than just a stress test or will it be a true beta for fans to take part in? Is it safe to assume that the other ways to get access will be pre-ordering the video game and/or attending events to get codes? Let us have it all down in the comments and then feel free to discuss it as you wish. We will bring you more for Blood Bowl 3 as it is out there. All you have to do is keep checking back for those updates and much more.