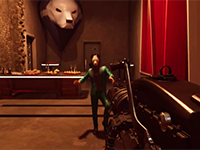 If you had Deathloop on your PS5 and PC launch list, then you will be excited to know just when you will be able to play that game. As long as there are no unforeseen delays that is. It looks as if Arkane is ready to spill the beans on that and we will be able to play Deathloop on May 21st of 2021. A little bit before the originally thought June of 2021. This could be a great sign that we will not see any delays, but that is always a thing to worry about when games even go gold out there. Not to name names or point fingers and anyone title in general. Just know that for now, we will see the game then and we can get the ball rolling with pre-orders if we so choose.

Yes, the pre-orders are ready for those out there looking to get in on Deathloop at launch. Be it in the Standard edition or the Deluxe edition of the game. The Deluxe edition offering up more in the way of weapons and skins to wear as well as the soundtrack to the game on top of the game as well. Both of the versions of Deathloop will have the same pre-order bonuses with an extra weapon, skin, and perk available for those looking to shell out the cash a bit ahead of launch. It is interesting that we are not seeing anything else in these bundles, but maybe we are moving into the digital only world even more now.

Deathloop is coming to console exclusively on PlayStation 5 on May 21, 2021, and will launch on PC on the same day.

Welcome to Blackreef, where the party never stops and neither does the killing. This is Deathloop, a next-gen first-person shooter from Arkane Lyon, the team behind Dishonored. Our hero Colt is trapped on Blackreef, stuck in a timeloop and forced to relive the same deadly day over and over. Armed with extraordinary abilities and devastating weapons, Colt is going to have to use every tool at his disposal to put an end to the cycle and find his way off the island. To do so, he’ll have to take out eight key targets that are scattered across the island before the day ends and the loop resets. And he’ll have to do all this will avoiding his rival Julianna, whose sole goal is to keep the loop going by any means necessary. If you’re feeling villainous, you can even choose to play as Julianna and invade another player’s campaign. Learn from each cycle; try new paths, gather intel and find new weapons and abilities. Do whatever it takes to break the loop.

Deathloop is now available to pre-order for both PlayStation 5 and PC via the Bethesda.net Launcher (Steam pre-orders will be available soon). Get all the details on what’s included in each version of the game, as well as the pre-order bonuses, below:

The standard edition of Deathloop contains the base game and comes with the following pre-order bonuses: The following bonuses are included when you pre-order the Deluxe Edition:

Are you amped to see that Deathloop will be hitting in May now or do you think it is still too soon to celebrate given the state of the world? Is it interesting to see that the only true extra between the editions will be the soundtrack or will these be weapons and skins you can only ever get in this bundle? Is it also weird to have a PS5 only item in the Deluxe edition even though the game and edition will be sold for PC too? Let us know what you are thinking about all of that down in the comments and then feel free to discuss it all. If there is more for Deathloop, we will update it all here. Just be sure to keep checking in for all of that and much more.