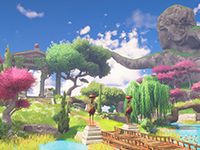 Here we go with a little more for Immortals Fenyx Rising to get us all amped up for the title when it hits on December 3rd. As if Ubisoft did not have a whole lot going for it right now, we have this title hitting so soon after the launch of the PS5 and Xbox Series X while also hitting the PS4, Xbox One, Switch, and various PC outlets. For now, though, we will ignore the older systems and focus in on how Immortals Fenyx Rising is going to look when it hits the next-gen systems. Something that feels a little off to say given the cartoonish style that the game has, but it is some new gameplay to look at for it all. So, there is that.

What you are about to see is not the most exciting gameplay you will see for Immortals Fenyx Rising, but it is a showing of how it looks like it will flow on the next-gen systems. Specifically, the PS5 here with the 4K visuals and all of that. There looks to be a whole lot of world to explore here as we head out to help those pesky immortals out there, but the true action hits about half-way through the video here where we see some combat and extra abilities in use. The thing that most gamers want to see when the game is stylized and not trying to sell any photorealistic views of the world. Take that as you will and then feel free to enjoy it all over and over.

Take a first look at the stylish Immortals Fenyx Rising running on next-gen consoles with this 4K PS5 gameplay.

Are you blown away by this new bit of gameplay here for Immortals or do think we just need more action in a game as this one instead? Do you suspect that this was just to show off how a game like this might look with the higher visuals available or just some B-roll that was not the best representation of the game? How do you feel about the action we did get here and does that look like it will be fun to spam over and over or will we have so many other options we will ignore it after a while? Let us have those thoughts down in the comments and then feel free to discuss it all as you wish. If there is more for Immortals Fenyx Rising, we will have it here for you. Be sure to keep checking back for all of that and more.