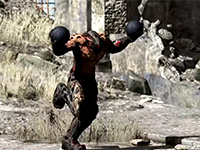 We can soon add the Switch to the growing number of systems that we will see the Serious Sam Collection on, as it has been announced that it will be coming there today. Not launching on the console as of today, but it has been let out there that we will see this updated collection from Croteam on the system at some point. Just one more place to give Serious Sam a go and then be able to take the mayhem on the move as you so wish. All of which will be available on November 17th for those looking to get all of these titles in one solid place again. See, I was getting to that release date too.

For those that missed out on the Serious Sam Collection the first few times it made the rounds, it is a nice bundle of the HD versions of the past three titles and the expansions that followed up after. It has hit all of the current platforms, and presumably the next-gen with backward play, and now it will finish off the set with the Switch next week. Those Nintendo-only gamers do not need to worry about making any leap just yet if Serious Sam was the title to make you do it in the first place. Just be glad you are not left out now and get ready to have something to keep you going as everyone else tries to shame you with the latest stuff this week.

Experience one of the most explosive shooter game series of all time as you save the world from a merciless alien invasion. Visit the ruins of ancient Egypt and roam through the vivid arenas of South America fighting seemingly never-ending hordes of enemies using an extremely destructive arsenal including shotguns, heavy lasers, rocket launchers, a huge cannon, and an iconic minigun.

Tired of playing alone? Go to war against Mental's horde with up to 4 players in local co-op, blasting your way through the campaign or the stand-alone survival mode. Finally, put your skills to the test against other players in classic multiplayer modes including Deathmatch, Team Deathmatch, Capture the Flag, and more.

The hordes demanded Serious Sam Collection on #NintendoSwitch and who are we to argue.

Will you be picking up the Serious Sam Collection over on the Switch now or have you been playing it for a lot longer than expected now? Did you figure it was a matter of time before this happened or did you think the Switch was going to miss out? Will we get to see the latest in the franchise on the various systems over time or will we have to wait years for that to truly happen? Let us all know down in the comments and then feel free to discuss it all as you wish. If there is more for the Serious Sam franchise, we will share it all here. Just be sure to keep checking in for that and much, much more.