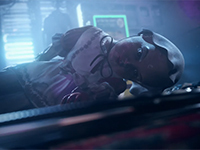 The launch of Observer: System Redux is here and we need to get ready to go back into the world of Observer one more time

This week is a big one as the games keep flowing out with the PS5 and Xbox Series X here and now we have Observer: System Redux to give a go again. That and play the extra content that is getting added in with all of the visual updates we have from Bloober Team here this week. Kind of the way that things should go instead of just charging us for a slightly improved game. I have a feeling that Observer is going to get it right here and we can know for sure here soon. Well, today on one system and on Thursday for the other. Splitting the release yet again and hopefully we can keep things to ourselves and truly re-enjoy it all again.

This all means that we have a new trailer for Observer: System Redux to look at today even if it is more on the cinematic side of things. It gives those that do not know the world all too well a little more insight into it all. Also a much darker side of the cyberpunk genre that will be exploding here again in the coming months. Not just with the big name we know is coming but in the various ways as Observer is coming. You can see what I am talking about just below or just pick up the game for the Xbox Series X as soon as you get that today. Then on the PS5 when you get that on November 12th.

Observer: System Redux releases on PlayStation 5 November 12, 2020 as a day 1 launch title on that platform.

Are you going to be picking up Observer again here or will it just live on in your memories moving forward? Are you glad that they did not spoil any of the new stories here or would you have liked to see a bit of gameplay? Do you think this will be a great deviation from the traditional look at cyberpunk title or will it be lost when the big one comes out next month? Let us all know down in the comments and then feel free to discuss it all below. If we have more for Observer: System Redux, we will share it all here. Be sure to keep checking in for all of that and much more.