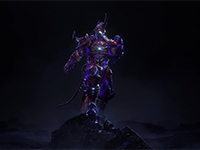 In just under a week now we will be able to experience Godfall on the PS5 as the console launches into the world for many gamers out there. It will be one of the few titles on the shortlist of games that will be natively on the console at launch and not just a backward title. All of which by design from Counterplay Games and Gearbox for sure, but we all knew that Godfall will be hitting the PC too at some point. This would be the bigger update we have here for the game right now besides the launch trailer we have now. Although the footage we have is exciting and shows off some fun aspects of the game.

For those that may not want to play Godfall on the PS5, it looks like it will be exclusive to the console for about six months before it hits the PC on May 12th of 2021. Now we have the dates for all of the various platforms we will see the game on. We can then move into watching the launch trailer to see just how things have progressed between the cinematics and gameplay as we have now. You can view it, as mentioned, just a bit lower down. Then you can head out there and pre-order or buy Godfall to experience for yourself.

Aperion is on the precipice of ruin. You are the last of the Valorian knights. Godlike warriors able to equip Valorplates, legendary armor sets that transform wielders into unstoppable masters of melee combat. Tear through foes as you climb through the elemental realms and challenge the mad god, Macros who awaits you at the top. Ascend in Godfall, the first-of-its-kind, looter-slasher, melee action-RPG.

Will you be picking up Godfall next week or will you be looking to play it all on the PC next year? Do you think that this will be the big title for the console at launch or will it get cycled in like any other title out there? Did you assume that we would see the PC version that far out as it usually is or did you think it could have been a full year until it launched there? Let us know what you are thinking down in the comments and then feel free to discuss it all as you wish. When we have more to share for Godfall, we will share it all here. Just be sure to keep checking in for that and much more.