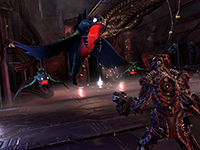 Dark Sci-Fi title, Hellpoint, is heading to the PS5 and Xbox Series X in more than just Hellpoint backward compatibility

Color me not surprised, as we now have another title that will be getting the PS5 and Xbox Series X upgrade next year with Hellpoint. Okay, well, a little surprised as it is not the huge AAA title that everyone has their fingers of hearing will be making that jump but it will be something that Cradle Games will give us so we do not need to rely only on backward compatibility to experience. It might even get more games out there to play Hellpoint as it will add another title to the small list of titles that will be fully using the power of the next-gen systems. If that is something that you need to fully have at the start of 2021.

For Hellpoint, the biggest change we have listed here will be that there will be two modes to play the game in on the systems. Performance and Quality mode being the two names. As they kind of allude to, one will offer the game running at Dynamic 4K resolution at 60 fps and the other will be running at Native 4K at 30 fps. The is also a planned patch that will allow Hellpoint to run at an unlocked framerate too. My guess is that will be seen better on the PC version and not so well everywhere else, but we will have to wait and see. Maybe by then we will see a solid player base for the game to demand more from it all in the future too.

The dark Sci-Fi Hellpoint from developer Cradle Games and publisher tinyBuild will launch on PlayStation 5 and Xbox Series X/S in 2021. The enhanced version will include support for higher framerates and resolutions, faster loading times, and a choice of two visual modes:

Next-gen owners won’t have to wait until next year to experience Hellpoint on PS5 and Xbox Series S/X. Thanks to the backward compatibility, Hellpoint will run better on the new consoles when they launch: a new ‘unlock framerate’ option will be added with a patch.

For existing and future owners of PS4 and Xbox One versions, the upgrade to PS5 and Xbox Series X/S versions will be free.

Was Hellpoint the title you were expecting to see get this full upgrade in next year or did you think it would only be a backward play title? Will you be interested in running the game without a locked framerate or will that only be for the PC gamers at the end of the day? Would you have rather seen other upgrades come to this title besides being able to run at the resolutions listed? Let us all have those answers down in the comments and then feel free to discuss it all as you wish. If there is more to Hellpoint, we will update you here. Just be sure to keep checking back for all of that and more.