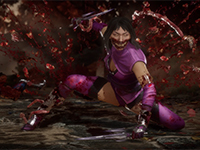 The gameplay for Mortal Kombat 11's new take on Mileena is here and in full motion. We knew she was coming and not just in the cameo state we have seen in the game so far. The full version of the character hits us on November 17th in the Kombat Pack 2 or the Mortal Kombat 11 Ultimate edition when it releases into the world on the PS4, PS5, Xbox One, Xbox Series X, Switch, and PC. Pretty much all of the platforms at this point for those that have not been following along since the game first launched. For now, we will take a look at the last of the new characters that will be coming here.

As was to be expected, we get to see her in there with the sai and gaping maw of teeth we know from all of the Mortal Kombat titles in the past. In this version, she seems to be a lot faster and fluid that I remember her in any of the past titles. All of which is a great thing and seems like she will be a force to be reckoned with within the game. She also seems to be much more visceral in this version, so get ready for all of the blood to flow out there in Mortal Kombat 11. Have a look at her in motion just below and see why it is was good that Kronika brought her back into the mix again.

Warner Bros. Games and NetherRealm Studios today revealed a new Mortal Kombat 11 Ultimate Gameplay Trailer showcasing the return of the fan-favourite fighter, Mileena. The product of Shang Tsung’s diabolical cloning experiments, Mileena is a fusion of Tarkatan blood and Edenian physiology, making her the perfect blend of Baraka’s ferocity and Kitana’s athletic grace. The evil hybrid benefits from the strengths of both bloodlines in battle, utilizing extraordinary speed, nimble acrobatic prowess, and terrifyingly raw savagery, along with her trademark sai, sharpened claws, and new twists on her classic special moves.

Brought forward in the timeline by Kronika, Mileena has learned of her tragic future – her brief reign as Outworld's Empress and her death at the hands of D'Vorah and Kotal Kahn. Determined to regain her throne, Mileena has begun Outworld's civil war anew and will destroy any Kombatants that stand in her way. Mileena joins the roster as a new playable fighter on 17th November as part of Mortal Kombat 11 Ultimate and Kombat Pack 2.

Did you expect to see Mileena this fast and visceral in Mortal Kombat again or is this the best surprise to get today? Do you think that she will take to the top of the fighting charts when she comes out? Will this truly be the last character we get to see in the game for now or will there be more surprises in the coming weeks and months? Let us all know down in the comments and then feel free to discuss it all. If we have more to share for Mortal Kombat 11, we will share it all here. Be sure to keep checking in on the site for all of that and much more.