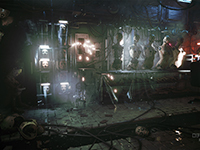 Another interview with the late Rutger Hauer about Observer is here for us to get further ready for the release of Observer: System Redux

We are back with yet another "lost" interview with the late Rutger Hauer to help promote what we can expect when it comes to Observer: System Redux. This new version of the game is still hitting the PS5 and Xbox Series X next week, and we all need a reminder of it all. That and just a reminder of this acting legend that helped bring the original Observer to life for us all. A solid thing given the cyberpunk history of actor and the subject matter of the core game. Interestingly, all of this is something that comes up in the latest interview we have to look at today.

Most of this is just the feelings and thoughts of the actor when it comes to some of the themes for Observer. The big one being the idea of brain hacking and memory viewing. Funny enough, it also happens to be the shortest and most direct answer that we get too. Something along the lines of stay out of my brain as many of us generally feels. I will not say much more for those that want to see it for themselves. Even if there is very little more in terms of gameplay for Observer: System Redux for those that do not care about these kinds of behind-the-scenes videos.

In celebration of Observer: System Redux going gold, Bloober Team has released a second interview video with the late Rutger Hauer which was shot during the actor’s time in-studio recording lines for Observer. In the video originally shot in 2017, Hauer digs into his time with the team and answers questions about where people and technology intersect.

Are you ready for Observer: System Redux to launch out there or will you be waiting due to the PS5 and Xbox Series X availability limitations? Are you glad to see more of this actor after his passing or would this have helped the original sales of the game? Would you like to see more of the video game itself or do you like these behind-the-scenes videos to keep you engaged? Let us all know down in the comments and then feel free to discuss it all as you wish. If there is more for Observer in general, we will update it all here. Just be sure to keep checking back for all of that and much more.