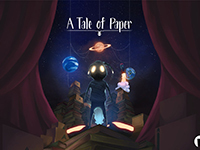 A Tale Of Paper

The indie titles keep rolling out here with A Tale Of Paper being the next one on our list for the PS4. It caught our eye not that long ago when we first saw that Open House Games was going to be able to give the game a shot with the help of the PlayStation program designed to help out smaller studios. That is not the aspect of the game we are going to go in here, though, as it is out there and we had the chance to give it a solid play playthrough here. Sit back and get ready, as here we go with our review for A Tale Of Paper so you can figure out if it will be worth your time and money.

It is always weird when you wake up as a sentient piece of paper that has been crafted into a humanoid form. It can be a bit jarring but that does not mean that we are not ready to set out into the world and explore. There could be a whole lot of wonder out there as well as a whole lot of danger. That is what we are set out to do while navigating things and trying to figure out how to get from place to place. Thankfully, we also have the ability to fold ourselves into different shapes to try to make this a bit easier in the longer run. As I mentioned above, we do have the ability to fold ourselves into a few other forms to navigate the world of A Tale Of Paper. Some of them are true origami folds and the others are a little more primitive. It is an interesting mechanic in the game, but it felt like it was used very sparingly in much of the game. Sure, we have the ability to turn into a frog to get higher jumps or an airplane to glide a bit further, but I found that most of my time in A Tale Of Paper had me in the basic form running around and jumping as normal. Maybe this is just how I found playing the game was easier, but it felt like every time the new form was added it was followed by a short bit of gameplay where it was needed then it could be mostly ignored moving forward.

The only other big issue I found with A Tale Of Paper was the fact that it felt like there was a bigger story going on, but it never was presented in a way that could be grasped. I could have been reading into more than what was intended here for the game, but it felt like there was some reason behind each area beside it just being a cool video game place to be. It just never was able to be fully rendered for A Tale Of Paper in terms of coming across. Maybe it was up to the player to make up as they went along with a game as whimsical as this one, it just felt like it was lacking in that department and I would have wanted a bit more. The level designs in A Tale Of Paper always felt like they were well thought out and never just tried to use the "because video games" mentality to it all. I do not think I came across a single place in the game where I was wondering why things were laid out the way they were and that is rather impressive for a small studio to pull off. More so when I never felt like I was lost in A Tale Of Paper and if I could not find where to go it was on me missing a clue or in-game hint and not because it was designed that way. It is an art form that seems to get lost by many developers out there and it comes across extremely well with this one. Especially when you realize that there are barely any story clues as to what to do next but it all flows correctly anyway.

Even though they felt like they were few and far between, each of the new forms we could take in A Tale Of Paper always had some solid mechanics and felt like they were very intuitive to their use. I think the only time I ever felt like I was out of place was when turning into a crumpled-up ball of paper. It would just lay lifeless unless the world physics were there to make it roll. You know, kind of how it would be when taking a form that offers up no locomotion naturally. Something that may sound weird to say but when playing A Tale Of Paper, it makes perfect sense and you know more times than not when each will come into play. I think this is why I was hoping they would come into play more often as they all worked so well with the rest of the game. At the end of the day, A Tale Of Paper was a fun and short platforming title that I felt was worth the time I put in. A nice little break from all of the darker and grittier titles we have out now or will be coming out soon. It is not without it its flaws, as I mentioned above, but those can be overlooked relatively easy with the solid gameplay mechanics and levels that have been built out there. I just wish there was more to experience for A Tale Of Paper as it is short and after completing it once there is little in a replay value. Unless you want to claim you ran through it all in under forty-five minutes once you knew how everything played out.

A Tale Of Paper — Launch Trailer

A Tale Of Paper was developed and published by Open House Games for the PS4 on October 21st, 2020. A PS4 copy of the game was provided by the publisher for reviewing purposes.