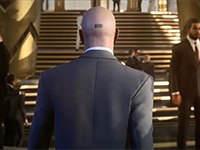 Add another platform to the growing list for Hitman 3 as it will now be heading to the Switch. An interesting addition as it never felt like the system would be able to handle what the game could pump out before now. I am sure that is why IO Interactive is not just bringing it over to the system but giving us the option to play via cloud streaming on the Switch. So, technically Hitman 3 is not coming to the Switch but it will be playable on the system for those that are looking to get the murder on via the console. That or while on the move in general when we can do that safely again.

This might not the biggest announcement for Hitman 3, but it does come with some new gameplay we have yet to see for the game. We get to see Agent 47 climbing the outside of a massive skyscraper to make his way in to the target. All of which is something that feels like it will be a trip to play in the VR setting if we do go down that path. I think that is the more exciting thing for anyone looking to get more Hitman in their life, though. Have a look at what we have here and just know that we will be seeing the game over on the new system.

We’re excited to announce that Hitman 3 will be coming to Nintendo Switch, playable via cloud streaming technology.

Did you ever expect to see Hitman make the jump over to the Switch or did you think it was a matter of time? How intensive do you think the data feed will be to play this via the cloud stream and will it cost more to play than just buying the game on the other systems? Would you be willing to climb like this in VR or will you be skipping that part in that setting? Let us all know down in the comments and then feel free to discuss it all down there. If there is more for Hitman 3, we will add it to the site for you here. Just be sure to keep an eye on the site for all of that and more.